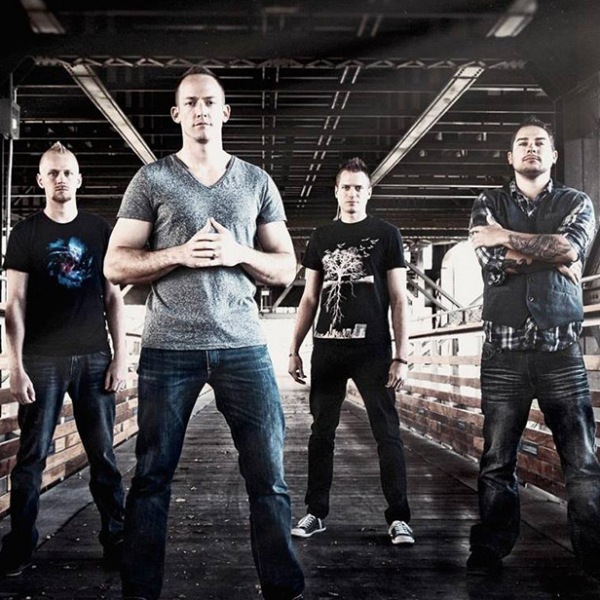 'For such a newly formed band, Modern Echo certainly show a level of maturity that a lot of other acts can only wish to achieve'. -MyGlobalMind.com

Modern Echo is a four piece hard rock band out of Milwaukee, WI. This new band has spent almost the last two years writing and recording their debut full length record, released on August 25, 2011. The guys are not new to the rock world, however. Guitarist MJ and vocalist Jonathan, formerly of Shattered Red, joined forces with JoeA, formerly of Lost In A Name, and added drumming phenom Ted Butch to round out the lineup for this new project. The result is an explosive group of songs that cover a wide range of subject matter and musical territory. The music shows influences of bands such as 10 Years, Breaking Benjamin, and Trapt, but with a slight progressive touch closer in style to A Perfect Circle and The Butterfly Effect.
"This was a unique project in that each of us in the band spent a lot of time with each songs, and the songs went through a lot of changes before we deemed them ready to be released," said guitarist MJ. "It was also a huge project - a lot of bands don't have the material or means to release a full length record initially, and although it took some time, we couldn't be happier with the results."

The band originally wrote about 20 songs before narrowing the list down to 12, and from there, those 12 were worked on intensely. The band chose Nick Radovanovic (Acceptance, Hangnail) of Skies Fall Studios in Kenosha, WI to handle the recording and mixing, and the project was mastered by Trevor Sadler of Mastermind Productions.
"The most exciting thing is getting to take these tracks out live. We've always prided ourselves as being a strong live band so it's gonna be great to get these tracks out in front of a live audience," MJ continued. The future looks bright for Modern Echo.