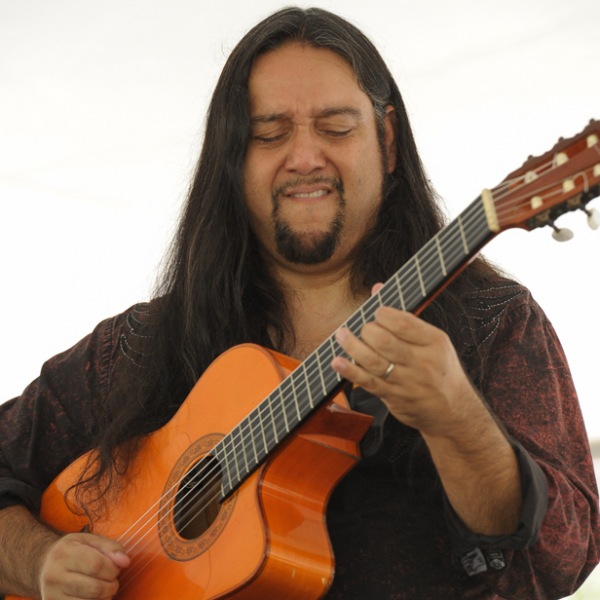 Jean-Pierre Durand is a composer/guitarist/cook who believes in the healing power of garlic and butter on ANYTHING.  He is also a co-founder of the critically-acclaimed world music group INCENDIO from Los Angeles.

Jean-Pierre was born to Peruvian parents in Biloxi, Mississippi. Apparently, they did not start a trend, as there is no record of more Peruvians there since then.  He started his formal musical life with piano lessons at the age of 7.  At 10 years old, Jean-Pierre joined the now-famous Paulist Choristers from St. Paul the Apostle school in Westwood, CA, receiving intensive ear training.  Then he discovered the guitar.  He is almost entirely self-taught on the instrument.  He performed extensively around the Bay Area (particularly little blues clubs like the Til Two Lounge) while earning his economics degree from UC Berkeley.

For the last fifteen years, he has focused on working with his wife and partner, Liza Carbe.  In 1997, they were hired by Paramount Music to compose cues for Entertainment Tonight, which were then used extensively on many other Paramount shows. Since then, they have written eight CD’s for Sonoton. Two of their tracks were just used in the box office hit, “Bridesmaids”. They have also written, produced, and performed music for “Extreme Makeover”, “American Idol”, “Who Wants To Be A Millionaire”, “Ellen”, the Flameworthy Country Music Awards, several independent films, and a host of other network shows as well as A&E (“History of Mexico” miniseries) and Animal Planet (“Who Gets the Dog” and “Ultimate Zoo”, amongst others). The duo also created a package of news/sports/market clips for Telemundo.  He is very proud of the fact that, over two days, he wrote and recorded a well-received collection of country music award cues while staying exclusively in pajamas.

JP, together with Liza, has co-produced and co-composed the seven Incendio international CD releases as well as two live DVD’s. Incendio is the winner of the 2010 Independent Music Awards. They have hit the Billboard, NAV and CMJ charts. Incendio performs over 150 shows across the US every year and has fans all over the world. Their music is featured on many different television shows including Gene Simmon’s “Family Jewels”. In addition, they have produced, co-produced, and/or engineered over 30 CD’s by other artists including acclaimed international jazz vocalist Carmen Lundy, saxophonist Steve Marsh (from Lyle Lovett’s Large Band), Liza’s blues project, the Red Mystics, and their pop group, Book of Storms. They have official endorsements with Alvarez-Yairi Guitars, Audio-Technica Microphones, Mackie Designs, and EAW Speakers.

Listen to music from Jean-Pierre Durand on the following albums: