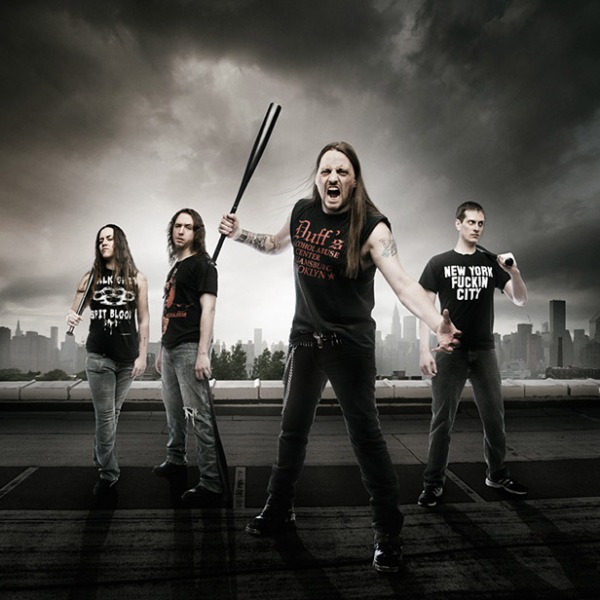 IKILLYA, a band from New York City, has just released their second cd: Vae Victis, a forceful and compelling collection of heavy music building off the many diverse traditions of Metal while creating new paths of its own. It makes an immediate impression with its raw aggression and intensity, and on repeated hearings increases its hold on the listener by slowly revealing layers of intelligence and complexity.

Jason Lekberg speaks often about the source of IKILLYA’s power, the “moment” the band inhabits. He compares the band to a grenade – inert and harmless in one state, then indiscriminately destructive. He speaks of the unique power of having been pushed too far, and then there is that powerful instant of strangely peaceful clarity when you comprehend what has happened and what must happen next, right before you lash out and swing despite the consequences. That flashpoint on the edge of stasis and explosion is IKILLYA.

As all their music derives its energy from that psychic moment, so the new album embodies this same point in the band’s chronology. They have grown, they have learned who they are, and now they are ready to break out. This is it. The title of the new album is Vae Victis, “Woe to the victims!” The Latin phrase derives from ancient Roman history, where it is shouted as a taunt to the besieged but ultimately victorious Romans by their enemies. It is, therefore, both a cry of victory and a challenge to the oppressed, as if to say “you won’t receive any mercy, so choose victory instead – or die trying.” The music of Vae Victis represents the warrior condition implied by the title: the tone is strong and ultimately triumphant, willing to confront the intensity of the struggle depicted and frankly aiming toward inspiration. It is heavy, but seeks new ways to earn that description.

This is Metal. Audiences will headbang to these songs. But there is more to the songs beyond pounding rhythms, even if some listeners may not at first notice the band’s complex and progressive structures. This is part of the band’s goal, one Lekberg compares to a magician’s sleight-of-hand. The audience may experience the smooth motion, while the magician has actually hidden a card behind their collective ears.

In the song “Driven”, for example, there is a discernible verse and a chorus – but they are not exactly where, or what, one would expect them to be. There are abrupt shifts in rhythm and key, but they are not perceived as abrupt. In this song and in others (notably in “Not Dead Yet” and “Jekyll Better Hyde”), it is apparent to the listener that there is a musical tension between chaos and coherence. At times, the vocal line is straightforward while the instruments take leave of standard forms; at other times, those roles are reversed. The symmetrical and the amorphous exist in dialogue throughout IKILLYA’s songs. This is a key aspect of IKILLYA’s sound. Some music in the world is pure noise; other music is melodically and rhythmically apparent. IKILLYA’S music emits from the tension between the two, and embodies both. The listener always has a point of entry to experience and collaborate, in a sense, in the wild wizardry of the musicians.

Lekberg’s vocals also dwell on several different planes, depending on what he’s saying. All of the vocalization can and must be described as “aggressive”, but there is a wide range of expression within that categorization. Some is clean vocalization, some seemingly spoken (or shouted), and some growled in the finest tradition of Metal. But none of the vocal choices are gratuitous. All are employed where they’re employed because the story being expressed in that moment cannot be expressed any other way.

As the music goes, so go the lyrics of the songs. The title song is steeped in battle cries, including the haunting chorus “Your corpse, my ladder” and “If I go, I remember – I was born ready to die!” But these outcries aren’t naïve. They’re the by-product of tough experience. Pain and failure are acknowledged as part of the process (cf. “And if I never felt this pain, I’d have no proof I’m even alive” from “Not Dead Yet”), as is the loneliness and difficulty of seeking inspiration from heroes (cf. “The stars always feel so close, I can smell their fear of falling” from “Mission to Mars”). Even a song as apparently hopeless as “Last Breath”, inspired by the untimely death of Harry Dully (“My life landmarked by unwarranted pain… Your name etched in stone too soon”) takes its rightful place in this journey through degradation to empowerment.

“Of the Most Magnificent” derives from Jason Lekberg’s roots. The name comes from the title of a book of his step-grandfather’s, who wrote semi-autobiographically and from a religious point of view. Jason follows a very different path, and the song addresses defiance of the world and exaltation of the Self, but in what he demands to be a better, more evolved way. Musically, the song explores another aspect of the IKILLYA bi-lateral compositional structure described above in the songs “Not Dead yet” and “Jekyll Better Hyde”: here, the percussion provides the continuous discernible thread of the song, providing the listener with the aural vantage point to follow the free-form sputtering stutters of the guitar and bass.

Redefining the past roots for the present reality and the reclamation of one’s own body and spirit from one’s ancestors is a recurring theme throughout Vae Victis (cf. “You, your memory, I will eradicate… It’s my life, and I will, control my destiny” from the song with the double-edged title “Bear Your Name,” which continues “But I will bear it better than you.”).

There is anger at the waste of human potential everywhere, anger at the futility of so much of working-class life (“We roam the streets with cops and criminals… Which one ya wanna be tonight?” from “Driven”), at how many hurdles have had to be overcome and how.... view more at http://www.facebook.com/ikillyaofficial