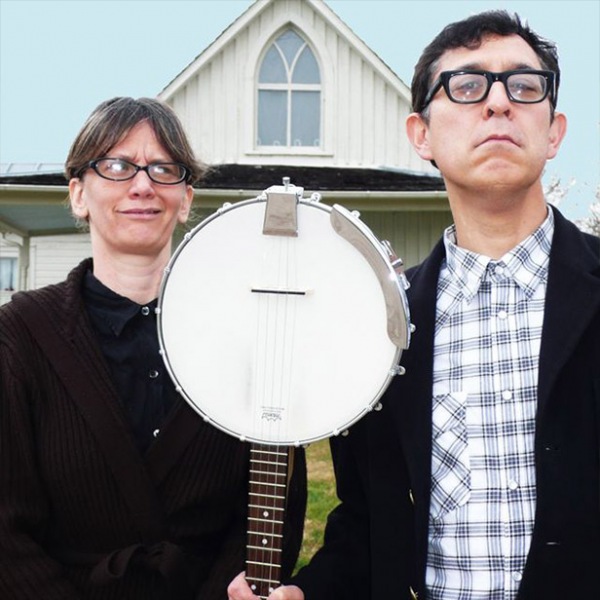 “When not performing, this duo is known as Rebecca Hall and Ken Anderson and you will need to go a long way to find a more talented and likeable couple. Their music mixes the snow of their home in Vermont, the dew on the grass of a cool summer morning in the Appalachians, the hard-scrabble grittiness and pluck of common folk the world over together with the melancholy of lost loves, broken hearts, and shattered dreams, distilling it into an intoxicating, hauntingly seductive blend that you always want more of. Ken and Rebecca’s multi-instrumental artistry’s range and depth is impressive, running from a shy lover’s soft, gentle caress to a hardened, bitter fist shaking against an evil fate, to a wry, ironic, self-mocking sense of humor. Their voices, each a thing of wonder in its own right, when combined completely bowl you over and by turn lift you to dizzy heights of joy and dash you to aching sadness. If you enjoy folk music with substance and style, your appetite for Hungrytown will never be satisfied.”

HUNGRYTOWN, which is the musical and married duo of Ken Anderson and Rebecca Hall, have been making music full time since swapping their midtown New York cubicles for the hills of New England in 2004. Since then, the couple has been touring extensively, and has released two CDs, the self-titled Hungrytown (2008) and Any Forgotten Thing (2011), both of which receive high critical acclaim and much airplay in North America, Europe and Australia.

Before Hungrytown, Rebecca made two well-received CDs under her own name (with help from Ken behind the scenes), Rebecca Hall Sings! (2000) and Sunday Afternoon (2002). Rebecca learned to sing in church when she was five years old, and had developed into a skilled interpreter of jazz and blues standards by the time she was in her 20s. Her discovery of roots music coincided with the reissue of the Harry Smith Anthology of American Folk Music in 1997, and inspired her to write her own material. She soon developed a reputation for creating simple, melodic and achingly beautiful songs, weaving modern themes into traditional song structures. “Hall’s original compositions hark back to the earliest traditions of acoustic Americana, tracing a sepia-tinged line from the Carter Family to the contemporary lo-fi classicism of Gillian Welch,” wrote Steve Bennet of Acoustic Magazine.

Ken is an accomplished multi-instrumentalist as well as a talented producer and arranger. He learned to play drums and organ as a child, and has since moved on to bass, guitar, mandolin, banjo and harmonica. He also has a remarkable gift for musical harmony, and is responsible for Hungrytown’s luxuriant vocal stylings. Having produced all of their recorded works, his artistry has been singled out for praise: “Anderson has a knack for crafting rich arrangements that don’t clutter things up,” writes Casey Rea of Seven Days (VT) magazine. When not touring with Rebecca, Ken is often upstairs in their home studio, called Song Catcher Recording, working with other songwriters and instrumentalists.

Hungrytown tours both the United States and abroad. Their recent overseas travels have included the United Kingdom, the Netherlands and Finland. On their home turf, Rebecca and Ken tour the country in the notorious Blue Meanie. This remarkable, fuel efficient, solar-paneled and, well, blue customized camper van was designed by Ken to serve as a fully-equipped, four-season home, office, studio and Conestoga wagon for their instruments and sound system–all in under 22 feet!