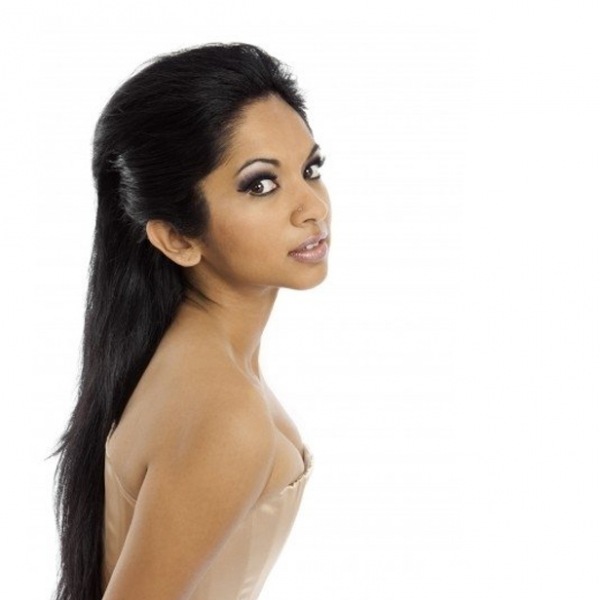 Some of the most daring, exuberant and technically proficient music has cascaded from vocalist / violinist Gingger Shankar. Born into a renowned family of musicians, she studied vocals and violin from the age of two.

Gingger, whose vocal range covers five octaves. Shankar's own invention, the 10 string stereophonic Double Violin, to listeners around the world. Gingger is the only other musician that has mastered and currently plays the Double Violin. The Double Violin, designed by Shankar and built by Ken Parker, covers the entire range of the orchestra's double bass, cello, viola and violin, and is the only one in the world. The combination of Gingger’s haunting vocals, double violin and also as a composer has brought her worldwide acclaim as an innovator.

Gingger, an extraordinary gifted singer, virtuoso violinist, model and songwriter, has toured all over the world as a solo artist, as a collaborator with master vocalist/violinist Shankar (Peter Gabriel, Frank Zappa) and a guest performer in many shows, winning over fans and critics alike. She has also lent her voice, violin and compositions to several album projects.

Born in Los Angeles, Gingger spent her beginnings studying within one of India's most acclaimed musical families. Her initial training began with her mother, an accomplished singer, who toured the world and won many awards as a classical star. She began teaching Gingger from the time she was a baby. Between the coaching from her mother and grandfather (violin), and her extensive training in classical Indian violin, opera, western classical music, piano, pop and world music, Gingger has developed a musical style all her own, yet one that encompasses all of these genres and creative experiences.

Touring internationally over the past few years, she has garnered both critical acclaim and a huge fan base, performing at world events such as The Concert for Global Harmony and Nelson Mandella's 80th Birthday celebrations. She also participated in Fiddlefest, a benefit for the Harlem Center For Strings at the Apollo Theater

As a model and actress, Gingger has graced the covers of magazines, as well as performed in many stage productions.

In the fall of 2001, Gingger and Shankar completed an extensive tour to sold out audiences all over North America. It was a complete critical success, and also helped them to take their incredible careers to unprecedented new heights. Their pop DVD, One in a Million, became the #1 DVD in the country, spending 4 weeks at #1 on the U.S. Soundscan / Billboard charts.

In 2004, Gingger, along with Shankar, composed, produced and performed vocals and double violins on Mel Gibson's The Passion Of The Christ, along with composers Jack Lenz and John Debney. Their voices and violins can be heard throughout the movie providing the haunting melodies and sounds that are unmistakably their own. They also composed chants which they performed with Mel. The movie has been a box office smash. She also appeared on the Tonight Show with Jay Leno to perform music from the Passion of the Christ.

Gingger recently wrote and performed on Celestial Body, a world music/soundtrack album for Universal, which was met with enormous critical praise. She followed the release with a worldwide tour. She also received a World Peace Music Award, which is dubbed as the Nobel Peace Prize of Music in September at the Civic Center Plaza in San Francisco.

In 2006, Gingger performed at the Juvenile Diabetes Gala at the MGM Grand in Las Vegas. Gingger also opened both the Method Film Festival (where she also held a workshop on how to score music for film), and at the Indian Festival of Los Angeles, where she received the Cinematic Scoring Achievement Award.