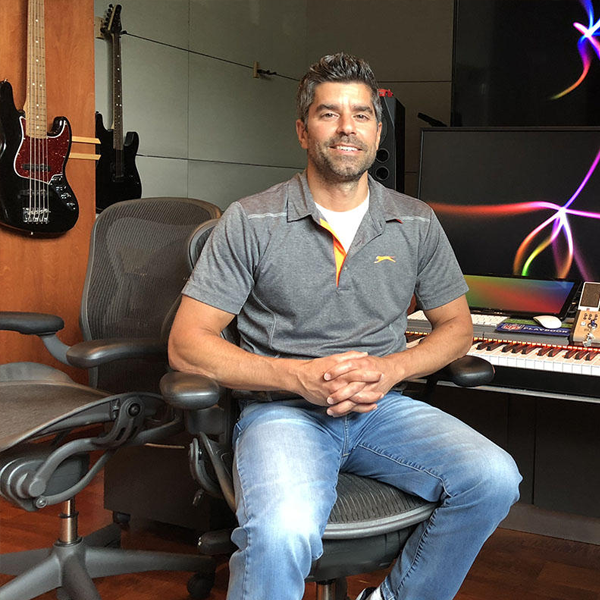 In the 30 years that David Robidoux has been the Composer/Music Director for NFL Films, he has amassed an impressive list of award-winning composition credits including Hard Knocks (HBO), Road To The Super Bowl (FOX),Lombardi (HBO), Thursday Night Football Theme (NFLN), All Or Nothing (Amazon), LeMans - Truth In 24
(ESPN), A Football Life (NFLN), America’s Game - The Super Bowl Champions (CBS), 30 For 30 (ESPN), The Grind (EPIX), Rush Zone: Guardians Unleashed (NICK), Brady 6 (ESPN), Lombardi Trophy Theme (NFL) and Football America (TNT) to name a few.

He has composed the “Official Themes” and branding of the National Football League, The Lombardi Trophy Super Bowl Theme, Pro Football Hall of Fame, NASCAR, MLB Network and Showtime Sports. He has collaborated over the years with artists like Will.I.Am, Forever The Sickest Kids, Steve Vai, Boyz II Men and Ludacris.

He recently composed the "NFL 100th Anniversary Theme" to celebrate the 100th season of the National Football League.

Robidoux has composed the Opening Theme for every show on the NFL Network including the award-winning series America’s Game, A Football Life, Good Morning Football, The Timeline and the All Or Nothing series for Amazon/NFL Network. Opening themes beyond the NFL include MLB Network, FS1, PGA Golf, Showtime Boxing, HBO, EPIX, Amazon and Nickelodeon shows. He has composed music for the video game franchises EA Sports Madden and NASCAR along with work for Blizzard Entertainment: Clash Of Clans.

He helped produce and contributed much of the music for the concert to pay tribute to the life of Steve Sabol, A Tribute In Picture And Sound: The Guts And Glory Of Football, featuring the
Philadelphia Orchestra at the Kimmel Center in Philadelphia performing live below a forty-foot screen. He also has produced concerts for the
Houston Symphony, Cleveland Symphony
and Utah Symphony. At Super Bowl 50 he helped produce a concert of NFL Films music to picture to celebrate Super Bowl 50 with the San Francisco Symphony.

His compositions are featured on the ten CD box set "Autumn Thunder - 40 years of NFL Films Music" and the CD – The Power and The Glory: The Music and Voices of NFL Films along with over 15 soundtrack album releases over the years.

Robidoux’s compositions can be heard more than 80,000 times a year on over 100 cable and network TV channels. He has been named SESAC writer
of the year twice and recently honored by BMI.