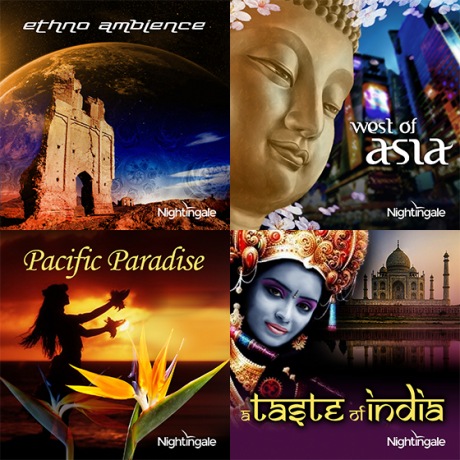 With stunning live performances, award winning, world-class composers and pristine production values, the music in this collection covers a vast range of moods and styles from dramatic, suspenseful and moody, to dance, upbeat and celebratory. The collection also includes some incredible solo performances with instruments indigenous to the regions as well as some great world / fusion high-impact trailer tracks. You’ll find anything from vintage '40s Hawaiian songs and Luau music to the very fun and colorful Bollywood dance music. Nightingale will continue to grow this series to include music from many more countries, enhancing this already versatile and first-class boutique library. 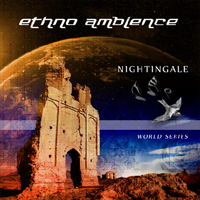 Exotic, romantic, cinematic and expansive. These are just some of the words that describe this lush ‘world moods’ CD. Each track sets an ambient tone with a world flavor that will place the listener in different exotic locales around the world - from an Arab market to the orient at night to the Serengeti ... and even to Scotland.  The “live” world instruments are exquisitely played by top, international musicians, making this music much more than a production CD, but one that is beautiful to listen to on its own merit. Each track features a full length version as well as a :60 and :30 second version. 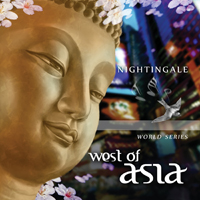 Cinematic, thematic, expansive and lush.  This music is a perfect fusion of East and West cultures, marrying the best and most exciting of both. All tracks combine instruments from various parts of Asia with Western orchestra, drums and electronics. The composition and production is inspired by the big Hollywood films, promos and trailers. You will be mesmerized, hypnotized and transported to a world in between worlds. Each track features a full-length version as well as a :60 and :30 second version with a bonus of some tracks featuring an underscore and/or alternate ending. 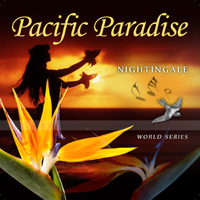 The romance, excitement and traditions of the exotic South Sea Islands are reflected in this great mix of tropical flavored songs. From visions of hula girls, swaying to tribal-like chanting and Tahitian log drumming, this CD captures the many moods of these paradise Islands with some great authentic & vintage recordings included as well. Each track features a full-length version as well as :60 and :30 second versions, as well as some alternative versions with varying lengths.
A Taste Of India (NIGHT 125) 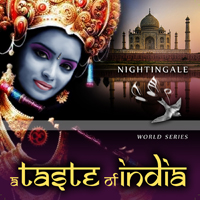 A stunning collection of Indian-flavored tracks by acclaimed Bollywood composer Amar Mohile, who has written the music for more than 60 films. This release includes a great mix of true indigenous music from different regions of India, with the occasional crossover to the West. The styles range through the popular dances of Bollywood to the classical ragas of ancient Vedic tradition and also includes some modern pop and hip-hop influences in the more dramatic and film-style tracks. With spectacular live performances and elegant productions, this collection also includes underscores and many of the live performances on their own as 'solo' tracks.