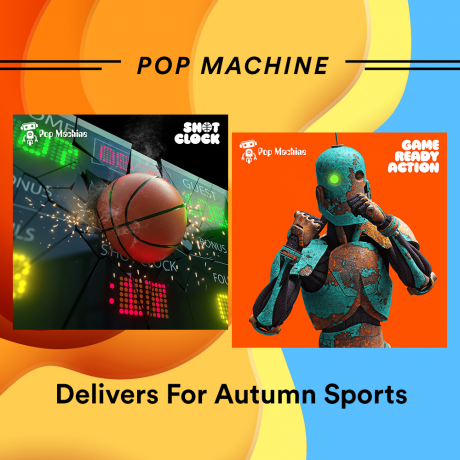 In APM’s most recent release for October/November 2021, albums “Shot Clock” and “Game Ready Action” from the Pop Machine catalog, make their debut to bring something fresh for all the Fall sports seasons! This new catalog is known to showcase diverse veteran talent spanning the Motion Picture, Television and Video Game industries and uniquely crafted for promos and advertising. What makes these albums special, is the music collaboration of Emmy award-winning composers Tom Hedden and Tom McWilliams. Whether you are looking for action cues and modern rock tracks that break boundaries or a versatile collection of EDM, Hip Hop and Pop tracks, both albums are worth exploring for all your action and sports programming needs.

Fun Fact: In 2005, Tom McWilliams was hired at NFL Films by Tom Hedden who was the manager of the music department and they have been doing music collaborations together for 5+ years and live only 7 miles apart.

Tom Hedden is best known for his tenure with NFL Films, during which he penned music for numerous series and specials, including five Emmy-winning scores. Orchestras including The Cleveland Pops, The Philadelphia Orchestra and The Houston Symphony have performed Hedden’s work. In 2009, Tom left the NFL to explore new creative opportunities in feature and documentary film scoring. His music remains a mainstay in sports media, being featured in the NFL and NASCAR halls of fame, arenas and stadiums for the NBA, NFL and Big East, television themes for the SEC Network and World Poker Tour, series composer for Amazon Prime and Golf Channel, radio themes for NPR and video

games for EA. Tom has also enjoyed extensive success in advertising, writing music for, among others, Reebok, Alltel, Exxon, Coca Cola, Carmex, Subaru and GMC. Notable placements for Hedden’s library offerings include films like The Waterboy and Little Children and television programs as diverse as The Daily Show and SpongeBob SquarePants. Tom graduated from Berklee College of Music, teaches composition at Philadelphia’s University of the Arts and makes his home in New Jersey’s Pinelands.

Tom McWilliams is a Composer that specializes in producing high energy, ear catching, sports music. He is currently a Music Editor for NFL films, where he started his career in 2005. With a vast knowledge of the industry, he combined his editing and engineering skills with his guitar talent and began producing tracks for Music libraries in 2008. His recent achievements include 5 Sports Emmys for HBO’s critically acclaimed “Hard Knocks” as Music Arranger  & Sound Engineer.” Along with that he has scored and edited music for other well-known series such as Amazon’s “All or Nothing”, NFL’s yearly special “Road to the Super Bowl”, Nickelodeon’s “NFL Rush Zone” cartoon, several of ESPN’s “30 for 30” series, NFL Network’s “A Football Life” and many others. With hundreds of tracks throughout different catalogues, you can hear his music in a wide range of productions including Golf, NFL, NHL, MLB, UFC and many more. Aside from sports, his music has been used in “American Idol”, “Dancing with the Stars”, “Big Bang Theory”, “Sleepy Hollow” and countless other productions ranging from MTV reality shows to documentaries. Tom Graduated from Full Sail University in 2002 and has a degree in Recording Arts. He has been playing guitar since he was a teenager in the mid 90’s. When he’s not working on music in one way or another, he is enjoying listening to it.

Pop Machine is the exciting new catalog under the creative direction of veteran Producer/Composer Robert Anthony Navarro. Showcasing diverse talent spanning the Motion Picture, Television and Video Game industries, and uniquely crafted for promos and advertising; Pop Machine is unlike any catalog you’ve seen before!

From “Radio-Ready” Pop, Rock and Indie to chart-busting Hip-Hop and Electronica . . . we’ve got you covered, and combined with the highest standards in music production and unrivaled attention to detail – Pop Machine will inspire you to rethink, re-imagine and reinvent the creative process.