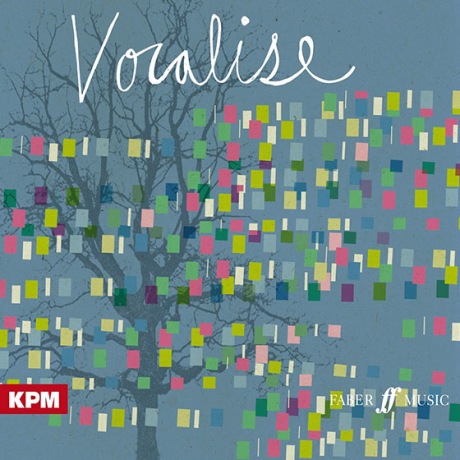 KPM and Faber Music have come together for the first time to create Vocalise (KPM 748). Truly a groundbreaking collaboration in production music.

Faber Music was founded in 1965 and is the sister company to the distinguished book publisher, Faber and Faber.  Faber Music was initially formed for the principal purpose of publishing the music of Benjamin Britten. It now enjoys a world-wide reputation as one of the leading independent British publishers of classical, contemporary, educational and media music.

Alongside repertory works by Vaughan Williams, Holst, Britten and Arnold, its performance catalogue features one of the most notable and envied lists of "house" composers including Oliver Knussen, Jonathan Harvey, George Benjamin and Thomas Ades. Faber Music handles the concert works of Paul McCartney and Jonny Greenwood as well as important musical theatre works such as Lloyd Webber's Cats, and Carl Davis's renowned scores for great films of the silent era.

Faber Music is famous for its integrity in classical music.  Looking after some of Britain’s most influential and cutting edge composers, it is the cream of the crop when it comes to contemporary classical music and KPM has created an album (with others in the works) with many of their impressive composers!

Vocalise (KPM 748) is a beautiful, charming and exquisite collection of wonderfully crafted wordless and vocal arrangements.

Faber Composers who have written for Vocalise (KPM 748) include:

Howard Goodall is one of Britain’s leading composers.  He won the "Classical Brit Award of 2009" and is the Classic FM Composer in Residence.  His new album ‘Enchanted Voices’ not only topped the classical music charts but was also premiered at London’s Royal Albert Hall. Goodall has scored themes for Blackadder, Mr Bean, Red Dwarf, The Catherine Tate Show, Q.I. and The Vicar of Dibley. His film scores include BAFTA-nominated The Gathering Storm, Bean: The Ultimate Disaster Movie, Bernard and the Genie, Blackadder Back & Forth and Mr Bean's Holiday.  His musical The Hired Man won The Ivor Novello Award in 1985, and his musicals have been performed around the world.

Philip Sheppard is a well known film and TV composer, he won a Sundance documentary prize for the film In The Shadow Of The Moon and the forthcoming film, Sergio, was shortlisted for an Oscar.  He's just finished a 9 part series for PBS featuring Barak Obama. He was commissioned to compose and produce the music for the London 2012 Handover sequence at the Beijing Olympics Closing Ceremony.  He's also worked with Scott Walker, Jeff Buckley, David Bowie and Jarvis Cocker.

Dame Evelyn Glennie is a world famous percussionist, she plays 100+ concerts every year and she has been deaf since the age of 12. Her percussion-based scores for film and television show extraordinary flair for underscoring mood and drama. Credits include seven series of Lynda La Plante’s Trial and Retribution, Bramwell, the William Boyd-scripted and directed feature film The Trench and, most recently, Golf in the Kingdom (2010), a US-feature film based on Michael Murphy’s novel.  She has worked with Bjork, Steve Hackett, Bela Fleck, Bobby McFerrin, Fred Frith and The King's Singers.  Throughout the course of her career she has won a Grammy, has been awarded an OBE and DBE, and has appeared on Sesame Street.

Alexander L’Estrange specializes in vocal music. He has toured the world with The Swingle Singers, conducted a children’s orchestra at the Royal Albert Hall directed musicals around the world.  L’Estrange’s compositions highlight classical modes along with jazz, pop, musical theatre and world music influences. His most recent work is Zimbe!, a 40-minute, African-inspired work for SATB chorus, children’s choir and jazz quintet.  He is a world renowned vocal music specialist.

Amy May is a composer, arranger and songwriter as well as a viola player and singer. She has arranged music for artists ranging from Jeff Beck to Muse and regularly performs with bands such as Elbow, The Killers and Snow Patrol.  She also plays with The Heritage Orchestra, as well as her own band, Paris Motel.

Simon Fisher Turner started out as a child actor and evolved into a teenage pop idol releasing his first solo album in 1969.  He is currently signed to Mute Records and has released 30 albums to date.  Having collaborated with Derek Jarman on several feature films, he has also scored the films of Mike Hodges. His media compositions include Stanley Kubrick’s Boxes and Sweeny Todd, the documentaries The Romantics and The Greeks, as well as the famous BBC Helicopter Ident and recent heart-warming advertisement for Macmillan Cancer Research.

Antony Elvin’s work combines music and comedy. He has written music for The Mighty Boosh Documentary and the theme song for forthcoming BBC series Swoosh, a program about superheroes in therapy.  He also writes and performs as part of the medieval trio, Princes in the Tower, and recently produced the latest Circulus album to critical acclaim.

Nick Lloyd composed the music for the BAFTA winning BBC Children’s series, Young Dracula.  A successful ad writer, he has composed music for such commercial campaigns as Confused.com, Grolsch Beer, Welsh Tourist Board and Yamaha.  Lloyd is a multi-instrumentalist who is at ease writing in many styles, from cutting edge electronica to orchestral.

Simon Bookish studied at Guildhall, and has scored music for the NFT’s production of Brecht’s play, The Caucasian Chalk Circle. He has released 3 critically acclaimed solo albums and has been featured on the cover of Mojo. In addition to his own unique compositions, He has remixed the likes of Franz Ferdinand, St. Etienne, Patrick Wolf, Charlotte Gainsborough and Max DeWardener.

Square Ears is a song writing team consisting of brothers Adam & Jez Burns.  They have worked on high-profile ad campaigns such as BT, Microsoft, Kinder Bueno, Sony Ericsson as well as popular TV shows like River Journeys with Griff Rhys Jones, Inside the Body, Come Dine With Me, The Underdogs and John Sergeant On The Tourist Trail.