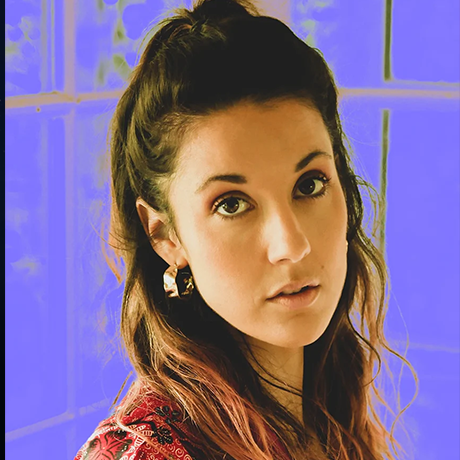 APM artist Rachel K. Collier is best described as a “one-woman production machine,” because she’s not just a musician, producer, and teacher. This Welsh artist is also an incredibly prolific performer, who started uploading her Ableton looping and recording sessions to Youtube a few years ago, and now racks up thousands of views on her videos. As her career in electronic music progressed from humble beginnings in her native Wales, Collier spent her time living and working in a “tiny studio” in London. Thanks in part to the shift in remote work that the Covid-19 pandemic initiated, she suddenly realized that moving home might just be a better strategy.

“I actually moved out of London during the pandemic, to the countryside in the east of England,” she explained in a recent phone interview. “I rented this amazing flower workshop that wasn’t in use and turned it into a studio. It was honestly so cool. I made so much music, I did loads of stuff, and I just realized I don’t need to be in the city anymore. I don’t need to be paying shitloads of rent in this really small studio.” Collier’s story is one that a lot of artists and creatives share, as the ripple effect of the pandemic led to lots of younger people moving out of expensive urban centers and out into wide open spaces—with noticeably cheaper rents.

In Collier’s case, it also meant moving back home, which prompted some self-reflection on how much she’s achieved in her career thus far. “I thought ‘I just want some space and somewhere it’s a bit more chilled out,’” Collier said. “It made me realize, through the pandemic, that I could probably move and do everything remotely. Now I have quite an indulgent big studio, which is like half the price of what I was paying in London, with everything I would want in it. Sometimes I still check myself and think, ‘Wow this is awesome, what I’ve achieved since back in the day with a tape player and a Casio keyboard.”

That’s how this professional first began her journey into the music world, at eleven years old, fiddling around with recording her keyboard playing with a cassette player. “I realized I could record one part on my keyboard, and then record another part and overdub it,” she said. “I just got obsessed with it, layering different melodies and sounds with my keyboard. I was never really scared of music technology as well, I always made it work for what I wanted to do. Looking back at those days, not much has changed, really.”

Well, except for the quality of the equipment that Collier uses, which now includes “a real badass tape machine”— aka her M1 MacBook Pro along with Ableton live—along with a host of other synthesizers and instruments to record with. But as she progressed from keyboard and tape player days into her teenage years, Collier knew that music was her only path, so she went on to take a Creative Music Technology course. Immersing herself in the machines and tech aspect of the industry helped her nail down just how much the creative side appealed, even if a healthy appreciation for Ableton has also been part of her story. After trying her hand at toplining and writing songs for other artists, eventually, she got into producing and creating her work–and performing it live so fans could see the process.

“I love the way you can so easily manipulate audio and automate it so quickly,” she said. “It’s a very intuitive program. Not to mention, I love the way you can take your productions, your stems, and so easily transform that into a performance piece in the same program. It’s seamless. Because I could perform with Ableton as well as produce, it meant I was spending a lot of time with the software. I feel like it just keeps giving.” Collier’s expertise in the software, and her ability to use it for striking live performances eventually led to the company reaching out to her to feature in some campaigns.

Releasing her debut album, RKC, in 2019, Collier generated quite a bit of attention with her single “Dinosaur,” a kiss-off to some male peers in the industry who had quite backward views on female musicians. “’m sure a lot of women experience this,” she said. "But I remember when I started releasing my own productions I would get the question ‘Who produced it?’ That question used to absolutely drive me mad. So we do have a big gender gap, but we do have a lot of initiatives that are trying to break it, and I feel like it has really improved.”

Given Collier’s obvious expertise as a producer, engineer, and performer at the same time, her work is helping bridge that gap as well. Some of her music is available under the KPM Shorts Library; you can check them out here.

"APM is my go-to, they never let me down. As someone who digs deep, APM has a seemingly never-ending supply of amazing musical nuggets. I keep throwing curveballs at them and I always get exactly what I need in return." - Joe Rudge, Music Supervisor (Marcel the Shell With Shoes On, Hillbilly Elegy, Mona Lisa and the Blood Moon)