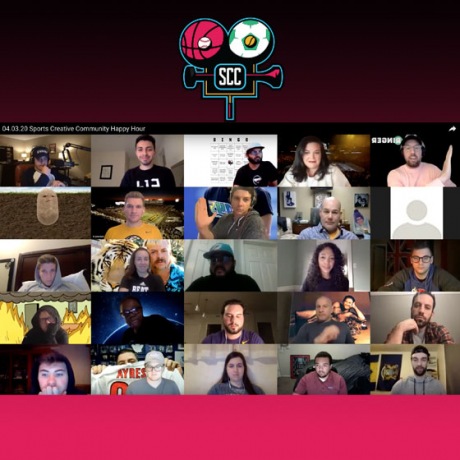 If you’re interested in joining the Sports Creative Community Slack Channel go to http://sportscreativeslack.com. There is a simple sign-up page that helps organize who all they have and what they do, and from there you are immediately invited into the Slack Channel.

While the sports world is temporarily shut down, members of the sports creative, digital media, and video world are flocking to community forums such as the Sports Creative Community Slack channel. It’s a place to collaborate and discuss industry trends and network with peers. The group was started in 2018 by Matt Desmond. Desmond brought on Tyler Joynt to assist as an administrator in the community.

“Matt reached out to me to get critiques on some samples of his work and some general questions, and I, unfortunately, was swamped with work and a new baby and forgot,” Joynt said. “He reached back out shortly after creating the channel and I immediately joined. It seemed like a great place for like-minded sports creatives to meet and network and chat outside of the normal arena like Twitter or at events.”

Joynt attended college for Digital Media and Design with an initial interest in web design, but he quickly fell in love with motion graphics and video editing. He was fortunate enough to win a competition to produce video board graphics for the Orlando Magic and would go onto work in the UCF Athletics video production department, as well as the University of Alabama’s Crimson Tide Productions and SMT (Sports Media Technology). At the time, he didn’t realize what a huge community the Sports Creative Community Slack channel would become and the impact it would have.

“The group itself is now comprised of so many different facets of the sports creative industry that we have topics ranging from what camera lenses to buy, to how teams are using certain social platforms, to animation feedback and even general business/team structure and project management efficiencies,” he said.”

Over the last two years, the support for the group has been tremendous with over 4,000 members. It’s a mark that has happened nearly almost all organically, no ads, no paid promotions. Once the word was out about the group, the community wanted to be a part of it.

COMING TOGETHER IN TIME OF NEED

One of the most common topics during the past month has been the COVID-19 pandemic. How are teams and organizations dealing with it? How can they pivot in this crucial time? What is the impact of storytelling and digital media with sports not being played? For members of the Sports Creative Community Slack channel, nearly everyone has been affected by the crisis. Joynt believes it is crucial they are a space where members can lean on one another and know that they are not alone.

“The community overall really has been very positive during this, and it seems that most people are focused on what they can do rather than what they aren’t able to do,” he said. “Matt had the idea to start a weekly happy hour, and that has been received really well. It’s been a great way for everyone to get together and learn how other teams/companies are handling this, but also to just be in the company of other creatives that you may not normally be around.”

The first happy hour saw over 200 members join in to hear a panel of eight industry professionals their stories and answer questions from the group. It’s also an excellent opportunity for those professionals who aren’t able to go to major conferences or conventions like IDEA, NAB, or SVG. It also helps teams and organizations fill job openings, meet freelancers, and students they may not normally have the chance to. When choosing the panelists, the group's goals are to have panelists from different types of leagues, sports, and organizations that can touch on various aspects of the community.

“We’ve had panelists from all of the major U.S. leagues, Facebook, freelancers, and even the Australian Football League (rugby),” he added. “They’ve been in roles covering live event production, social media content creation, brand integration, and more. Having such a large variety of entities and job positions has allowed us to reach a broader audience so everyone can feel involved.”

When Joynt joined the group it had less than 100 members and as mentioned has blossomed into over 4,000 which shows how connected the sports creative community is. For him, the most rewarding part of the ride has been connections made and the jobs they have helped people land.

“We have knowledge of over 60 full-time, part-time, and freelance jobs being acquired directly from the group,” he said. “Ultimately the goal is to continue to be a great resource for the sports creative community. We have a plan to start providing more resources as we grow with a tutorial series, podcast, more virtual happy hour panels, and even more meetups (once we are able) Our main goal is to not only help others in the industry but to help foster unification and keep it moving in the right direction.”