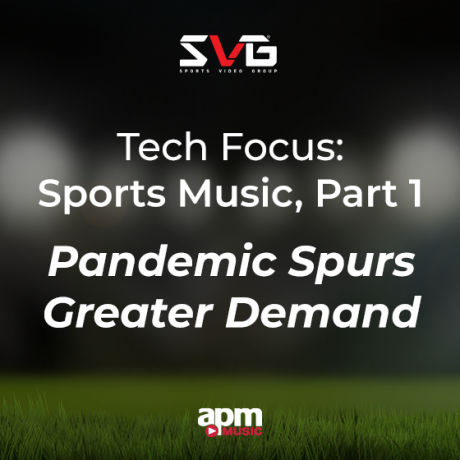 Production music — the vast well of styles, sounds, genres, and emotions underscoring televised sports — has been both a hotbed of legal turbulence (assertions of copyright infringements and DCMA takedowns abound over licensing issues) and a generically predictable process in which NBA shows reflexively get bassy hip-hop and baseball gets crunchy rock guitars. From the leading music houses that service the major leagues to the upstart indie-music mills whose home studios churn out some of the more fashion-forward (and royalty-free) sounds favored by online and margin sports, broadcasters and venue-sound specialists have literally millions of tracks, clips, and stems to choose from.

Then COVID-19 came along, bringing with it an entirely new conduit for sports sound in the form of augmented crowd sounds, cheers, and music. The production-music industry didn’t miss a beat.

“We found that sports was using a lot more [rerecorded] effects and music, both on the air and in the venue,” says Peter Alexander, sales manager, Sound Ideas, which provides those sorts of sound bites to Georgia Tech, Wake Forest Athletics, Hofstra University, and other collegiate customers. “The sounds are being picked up by the broadcast microphones, and they help the athletes and the viewers get more of a sense of normalcy. But we don’t expect [demand for that] to last once people are back in the seats.”

Last year, Whitney Arnold, VP, music services, Stephen Arnold Music, whose production-music arm The Vault has supplied production music for ESPN, the Denver Nuggets’ Altitude Sports, and Golf Channel, told SVG, “That’s the big question right now: how do we re-engage the fanbase of sports, and how do we keep them engaged until sports does come back?”

A year on, he says that the augmented crowd sounds, the faces on the MS Teams screens, and a production-music underscore for the NBA’s Orlando “bubble” answered that question.

“I think that was really powerful,” he explains. “The tie-in to production music is that, in-game/in-arena, the vibe is the same, or trying to be. The NBA had hip-hop beats playing during game play, and, with the virtual fans as a backdrop courtside, this made at least the broadcast feel normal and like there was fan engagement.

“Baseball,” he continues, “was a little harder because there was no way to disguise the big empty ballparks. But I saw some great TV spots around the fan cardboard cutouts, and the music that was paired with these spots felt like a normal cross-channel promo. A lot of teams did fantastic work trying to keep fans involved. And, even when music isn’t the primary driver of the message, it obviously always helps to set the tone and tell a story.”

According to Matthew Gutknecht, director, sports entertainment, APM Music, the imminent lifting of pandemic restrictions on sports has unleashed pent-up demand for production music and licensed popular songs. That has been especially true of teams and leagues that have been much busier in recent years developing and distributing their own custom content, with music a common thread throughout their social-media initiatives.

“We’ve been overwhelmed in the last few weeks, but in a good way,” he says, noting demand for music from the WNBA, MLS, NHL, and other leagues. “The market indicators suggest they’re anticipating high demand for content in the next few months as everything comes together again.”

>Read the full story at:  https://www.sportsvideo.org/2021/05/06/tech-focus-sports-music-part-1-pandemic-spurs-greater-demand/

Subscribe to our APM Music newsletter to receive weekly Music Director Picks in your inbox!