How APM Music Laid the Soundtrack to LSU’s Championship Run

If you pitched the story of LSU Football’s 2019 season to whoever produced Rookie of the Year (or even Ed for that matter), you’d likely get laughed out of the room. From the hometown coach nobody thought deserved a chance, to the discovery of the bench-riding backup turned Heisman QB, it would sound almost cliché and absolutely unbelievable. The only catch is, it’s real and we all got to experience it, thanks to the LSU Creative team.

But how do you tell a story that’s too good to be true? And one that’s being written in real-time and whose ending is unknown? While the origins of Orgeron and the myth of Burrow are intriguing, for a rabid fan base that’s heard them 1,000 times already, LSU Creative was tasked with distilling, bottling up, and distributing out the emotions in that locker room and among the fans at that specific point in the storied season. And to capture and tease what’s next without ever knowing for sure. So how did they do it?

“The biggest ways we were able to accomplish that was by gaining trust from the players and being in those situations, even if we weren’t allowed to use the footage,” says Matt Tornquist, Coordinator of Creative and Digital Content. “A lot of our postgame content down the stretch came from sticking a camera in someone’s face and asking how they felt. Sometimes they would say no they didn’t want to talk, but others would offer a lot of raw emotion and explain what was going on inside their head.”

One of those moments came from a Coach Ed Orgeron press conference. The team used Coach O’s audio to help explain that although the team may not have performed their best, they were able to come away with a victory at the end of the day. In addition, Tornquist noted that the messages from pre-game and post-game speeches also allowed his digital team to have a better feel of the mood, which in turn they conveyed to the fans.

At the heart of all LSU’s creative and digital content is the music. Selecting the right track for each piece is key to setting the tone, tempo and the dynamic—all critical in telling the story. Early in the season, Tornquist worked with lyrics that matched the performances and later on during their championship run switched to more instrumental music, in addition to other audio bites.

“The music can take any type of quote or soundbite and really change the whole dynamic to fit the story we’re trying to tell,” Tornquist explains. “Paired with proper music, a dull quote turns into an exciting motivational pieces. Music selection as an early component of the creative process really defines the whole end result.”

While Tornquist and team don’t necessarily have a set philosophy when it comes to music selection, it is ultimately about finding the right track for the piece while staying far, far away from legal trouble. Aside from the handful of times they’ve been able to get permission from producers or record labels for popular music, APM Music—a powerhouse synch music provider–is a seminal part of their workflow.

“We rely on the APM solution for about 90% of our projects,” he says. “We’ve seen it before: we are going into a big game or event and a team gets popped with multiple copyright claims and their account gets temporarily shut down. We don’t even want to take that risk!”

Tornquist goes on to say that heading into each game, the team went in with 10-15 APM tracks downloaded and pre-loaded into Premiere before kickoff.

“I tried to find things with varying tempos and feels to them so that in any given situation, we’d be prepped to match the mood of the game and team.” 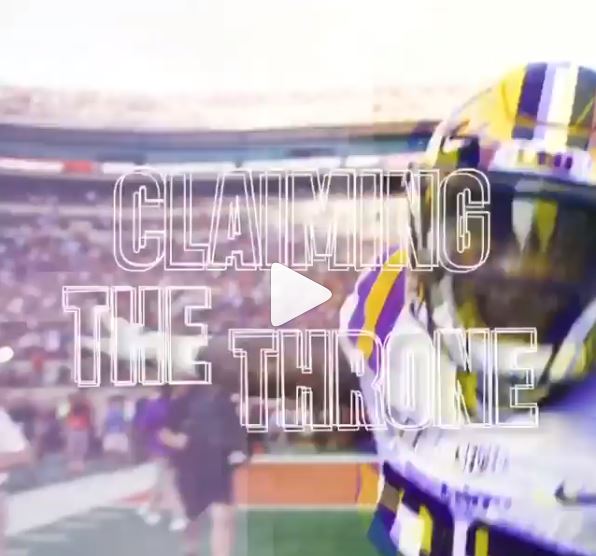 Check out this LSU video: https://www.instagram.com/p/B2Pkzxah2O-/?igshid=bqu1iytjbgzg

While the Tigers’ football team was earning praise on the football field, LSU Creative was being lauded for their digital prowess. Viral moments on social media became a frequent happening, and the constant push to engage fans with compelling video became a weekly occurrence. Tornquist had several pieces that stuck out to him throughout the season, one of those being the “That’s Joe” series featuring Heisman Trophy winner Joe Burrow.

“That is one of my favorite things I’ve ever worked on knowing how far out of my comfort zone it pushed me and I was so pleased with the result,” he says. “Another that sticks out is a video about running back Clyde Edwards-Helaire’s performance versus Alabama specifically because he reacted to seeing it and I was able to see how proud he was of the performance.”

Other standout video pieces included The Rock and former LSU Tiger and Super Bowl Champion Tyrann Mathieu, both done by Will Stout. Although Tornquist didn’t create those specifically, the impact of that content was felt on a variety of people including himself.

“I think the coolest part from my perspective was seeing how far the reach was outside of our normal fanbase,” he noted. “When the digital content we’re able to make causes people to start cheering for us in the games it makes a huge impact!”

The greatest viral moment of the year came after the confetti fell at the Mercedes-Benz Superdome in New Orleans. Quarterback Joe Burrow casually smoking a cigar at the end of the game drew hundreds of thousands of views on social media, countless articles, and a wave of comments and interaction.

“I’m extremely proud of that one because it is the most interacted post from any college football Instagram account ever, and that’s pretty wild,” he said. “I think that speaks to not only our teams’ on-field success but also our ability to be able to capture and properly portray their mood.”

So what is the key to a successful digital strategy? For LSU, it starts with how reactive they are. That has allowed them to match the team dynamic to their content and make everything look and feel authentic to the audience.

“In this day the general population is so used to ads and propaganda being shoved in their face 24/7 that they’re very good at filtering through what’s real and what’s just a sales pitch; and by our team being able to react to any given situation so well it has allowed our content to show that authenticity,” he explained.

As for what the future holds, well that’s the million-dollar question. LSU Creative goals from here on out involve continuing the success they had this year and applying what they learned to other sports and in ways that will work far into the future, regardless of whether or not the team is breaking records and winning National Championships.

APM Music offers custom music through their boutique APM Custom (http://custom.apmmusic.com) division and production music via their APM Search site (www.apmmusic.com) of over 800,000 tracks and more than 160 libraries, including both the MLB Music Library and the NFL Films Music Library.