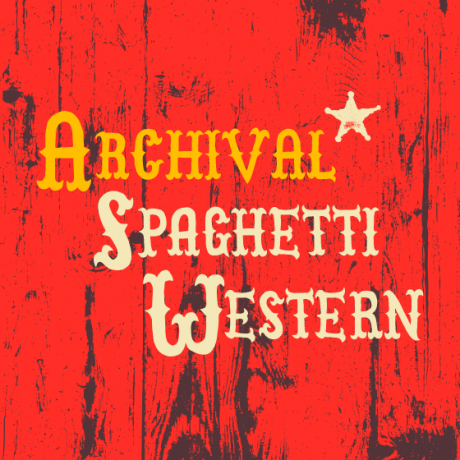 A fistful of archival Spaghetti Western cues to ride off into the sunset to.

With brilliant red and orange hues blending together above the horizon and the promise of adventure lingering in the air, the wild, wild west has long been a source of inspiration for musicians and filmmakers alike. During the foundational early days of cinema, Westerns became incredibly popular among audiences, with silent films such as The Great Train Robbery (1903) helping lay the groundwork for exceptional storytelling to follow for decades to come. In Hollywood, films depicting the setting of the western United States could be recreated with low production budgets, helping the category swiftly take shape due to not requiring an exuberant amount of funding like other commercial film projects.

During the 1960s and 1970s, action-packed sagas taking place under the sweltering desert sun were in exceptionally high demand in Europe, resulting in the development of what has since been dubbed the Spaghetti Western genre. Legendary Italian director Sergio Leone is credited with taking the genre to new heights as a pioneer of the craft, experiencing international success with now-iconic films such as his Clint Eastwood-starring Dollars Trilogy: A Fistful of Dollars (1964), For a Few Dollars More (1965) and The Good, the Bad and the Ugly (1966), to name a few. While there are several nuanced differences between a Western and a bonafide Spaghetti Western, one trait that binds them is the undeniable importance of incorporating stirring, dynamic scores.

Influential composers such as Ennio Morricone, Piero Umiliani, Bruno Nicolai and Alessandro Alessandroni, to name a few, each have rich musical legacies tied to the illustrative genre. While he was in good company, Alessandroni is often pointed to as being the pioneering force responsible for the signature whistling and guitar sounds that Spaghetti Western is truly known for across the globe.

During the mid-1960s to the late 1970s, countless Spaghetti Westerns were produced, primarily in Italy and Spain, with composers tasked with the creative challenge of designing and composing music that best captures the spirit and impact of these drama-laden, high stake plots. Although the term Spaghetti Western is not every film critics' favorite phrase to use, with some preferring calling these films Western all’Italiana (Westerns Italian-style), what remains undisputed is how invigorating soundscapes helped bring these films to life.

So what exactly comes to mind when being presented with the challenge of providing a soundtrack for epic productions that star cowboys, outlaws, heroes, damsels in distress, vigilantes, bank robbers, sheriffs, soldiers, cheaters, saloon regulars and/or concerned townspeople? To help point you in the right direction, APM Music has dug into its archival collection to put together a playlist of classics, hidden gems and orchestral themes to best serve historic, triumphant, suspenseful, emotional, mysterious and nostalgia-sitting tales.

Spaghetti Westerns are notorious for featuring expansive landscape illustrations capturing the flat and barren spectacle of the American west, with expressive tracks such as "Red Heathland," "La Bella Indiana" and "Nostalgia" great for setting a scene. Alternatively, songs such as "Spaghetti Western," "Nightriders" and "The Wild Bunch" cutting right to the action, bringing hustle and heart to the center of climatic shootouts, bar fights and other forms of dramatic debauchery. There is also a softer side to the impassioned Spaghetti Western drama, as exemplified by compositions such as "L'Amore," "Elegy For The Dead" and "Altalena Sull'Acqua." These melancholic, sentimental and romantic songs bring an air of sensitivity and care that showcases how multidimensional the human experience can be, especially when navigating themes of love, loss, grief, relationship woes, lust and devotion.

Elsewhere throughout this essential APM Music playlist, songs such as "Guitar Gallop," "Ballata Del West" and "Atavistic Desperation" include stylistic elements integral to a Western aesthetic, such as twangy guitars, evocative strings and characteristic whistling. Whether a production is looking to soundtrack a scene featuring a crowded saloon full of people playing poker or passing the time or building suspense leading up to when two rivals are set to meet at high noon on a dusty street, this playlist also touches on music for accenting quick-paced, tense situations such as gun fights, duels or instances of cheating. Tracks such as "Duel At Dawn," "Time Chronicles" and "The Stranger in Town" build in intensity, providing haunting, atmospheric themes that help add another layer of suspense.

With the Spaghetti Western genre an iconic part of popular culture and cinematic history alike, this archival collection of music is sure to offer a timeless and authentic glimpse into what makes the spirit of the west so captivating.

Check out Archival: Spaghetti Western below!