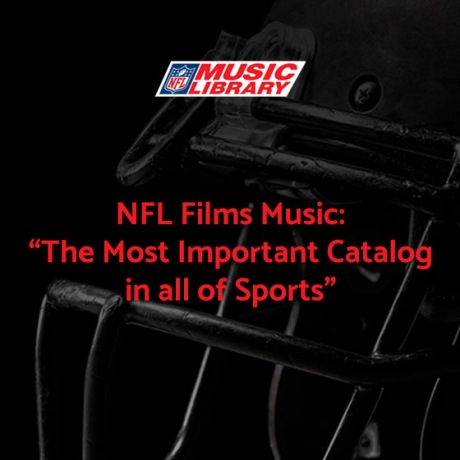 NFL Films Music: “The Most Important Catalog in all of Sports”

NFL Films Music: “The Most Important Catalog in all of Sports” - By Todd Grasley

Related Article: An Inside look at the NFL Films Music Library - with Tom Hedden

“This probably can’t be overstated, it’s the most important catalog in all of sports,” said Tom Hedden, the former Music Director at NFL Films and NFL Director of Music Administration, when asked about the NFL Films Music library. “Everything else will always be measured against NFL Films Music.” You’ve heard the tracks during your favorite NFL rivalries, Super Bowls, commercials, films, and entertainment. They create emotion and put the audience in the center of the most relatable and memorable moments.

Initially, NFL Films worked with a composer in Los Angeles named Mahlon Marrick. His tracks were mostly marches and had the same feeling as the music in the post-war newsreels.  To save money, Merrick sent his scores to Germany where they were recorded with the help of his young, American ex-pat assistant, Sam Spence, who was living in Munich, Germany.

As the story goes, there was a little time left at the end of a session and Sam recorded a few of his own pieces.The Sabols (Ed and his son Steve) who founded NFL Films loved them. When they offered to give Sam the job, he declined to say he couldn’t take the job from Merrick. Sadly though, Merrick fell ill and Sam got the job after all. There were other composers hired from the late ‘60s on and a few did 10 or 15 pieces but Sam was always in the mix.

Phil Spieller started with NFL Films in 1968 and remembers the “march music” in films.  He also remembers when they brought on Spence to produce about an hour of hard hitting dramatic music. Ever year from 1968 until Spieller left NFL films in 1984, Spence produced about 20-30 new titles.

“Many of those titles were not used until the football season was over and we started producing the highlight films for each of the teams,” he explained. “These were the specialty pieces that NFL Films became known for."

“After the library began to accumulate, NFL Films made the choice to sell “fan albums” to the public and package much of the material for licensing as a production library, Hedden added.  “In the mid-1970s there weren’t many options for production music in the U.S. and the NFL Films Music Library was very popular.”

“It was about 1979 or 1980 when I started putting together some of the specialty pieces into albums to sell to the fans,” Spieller added.

In the 1980s the big European libraries were becoming more accessible and cheaper to license and NFL dropped off in both the amount of music produced as well as support for the library in the form of new releases.

“To me, the music was what brought the fantastic camera work to life,” Spieller said. “The combination of picture and music often minimized the need for a lot of narration. Of course, with the advent of smaller microphones, we were able to hide them in some of the player's shoulder pads, so picture, music, and live action sound placed the viewer right in the middle of the action.”

By the time, Hedden arrived in 1990 nothing had been released in years and there were really only a few clients left. When he started with the NFL, his initial role was as Music Director, not composer.

“I was busy learning the NFL Films' way of doing things and trying to provide a great library resource and stay within a budget,” he said. “Composing and updating the library weren’t my first priorities.”

After his first football season, Hedden started to compose tracks for their facility clients.  This was mostly ad work, but it allowed him to show the football people that he knew how to write and produce music. It didn’t take too long before he was writing for them as well.

“When the commission for '75 Seasons' came along, the main football producers told Steve Sabol that I should be the one to write the score,” Hedden noted.  “It was a big project for ‘Films and kind of a 'make or break' moment for me writing music for the NFL. In the end, it won the Emmy Award and we were off.”

In came David Robidoux to join the party. Robidoux had been hired as an audio engineer a year after Hedden. For a few years, the two of them held down the responsibilities of other jobs and kind of fit the composing tasks in when they could. However, it became clear by the mid-‘90s that Robidoux needed to be part of the music department. When APM Music approached them about re-launching the library, it really helped justify the move and allowed them to get some more help so they would be free to make more music. Between the "75 Seasons" score, a few more contemporary collaborations between the pair and audio engineer, Vince Caputo, came about, and the group had a good quantity of new music to start the re-launch.

“Sam had also provided a package of music in 1990 that had largely gone unused as it needed a bit of editing and clean-up, but we had done that and it was starting to find its way into the shows and was becoming more recognizable with the audience” Hedden added. We were also in the process of digitizing our older material and it was perfect timing to put together a few collections of Sam’s classic pieces for the library.”

From that collection of music, the group made seven CDs for the initial package. Connie Red, from APM Music, combed through all the piles of vinyl records and they worked together to package the music in a way that would be colorful and easy to use while honoring all the history of the library. The initial seven CDs came out in 1996 and instantly became incredibly successful.

“For production music, they were a smash hit,” Hedden said.

Red served as the Account Executive for the NFL Films Library from the early ’90s to 2007 and played an integral role in helping to compile and coordinate track selection, mastering, marketing, and metadata for the library.

“The initial release included four archival/classic NFL CDs from the composer Sam Spence and three contemporary CDs, including the first Cinema Score album,” she added. “The NFL Films music has a sonic brand that is immediately recognizable. The orchestral scores are inspired and beautifully recorded. The contemporary albums have a lot of punch and grit.”

Before Hedden and Robidoux started at NFL, the library was roughly 1000 pieces of music. Though there were lots of other great composers that contributed to those first 1000 pieces, the Sam Spence compositions were really established as classics at the point they started writing. When the pair teamed up with Steve Sabol and all the other filmmakers, this brought a significant change to the NFL Films original music.

“This change gave the filmmakers a creative outlet musically during their process and brought Tom and me into the creative conversations from the very beginning when the ideas were first born,” Robidoux said.

The department has grown since Hedden’s departure. Robidoux called Hedden one of the most gifted people he knows when it comes to music and his talent’s don’t stop there. In the beginning, they were both just trying to add what they could create to the music of NFL Films.

“We each had goals and drive but never a great plan to take over NFL Films original music or succeed Sam,”Robidoux explained. “It happened very organically over time. Neither of us was hired as a staff composer, companies just didn’t do that, so we built it one piece at a time, with one film producer and then another and so on.”

He went on to note that they kept each other motivated throughout the process. The two made mistakes together that eventually helped them become better and build something really unique in a company that rewards originality.

“Most people don’t realize the challenges of trying to build something within an existing business,” he said. “It took a lot to get the catalog to where it is today. It’s a legitimate enterprise at this point, but first and foremost, it’s a huge creative asset that helps define the NFL and set it apart from every other sport in the world.

Robidoux’s department is fully self-administering the catalog and has three separate divisions now within the Original Music Department, the creative division to compose and produce music, a full administrative staff to oversee the catalog and cue sheet accounting for all of the NFL domestically and internationally, and an operations staff to manage and schedule projects within the NFL and outside projects.  As founder Steve Sabol frequently said, “there are three ingredients to NFL Films, the story, the cinematography, and the music.“

“One of Steve’s great quotes is 'without our music, our films would just be home movies,' Robidoux said. “Steve’s pioneering vision, combined with Sam Spence’s creativity produced something that had never been done. It built the groundwork for how every sport is seen today. Without them, there would be no dramatic mythology or emotional back story to athletes, they would just be news stories.

Robidoux is still composing as much as ever while running other operations. The catalog is well over 4000 compositions to date and services all the programming for The League, NFL Network, NFL.com, NFL International, all social media, and all the NFL Films productions. Whether it’s rock, hip hop, or full orchestra the music pushes the emotional content on the screen. He calls it thematically based dramatic music.

“I would place NFL Films original music as a pivotal moment in sports,” he said. “It’s helped usher in the mythology that athletes were larger than life, extraordinary people. Doing things everyday people couldn’t dream of. It married sports with Hollywood in a very dramatic way. As far as sports music, NFL Films music is, without a doubt, the pioneer that took sports music from newsreel sounding programming to emotionally packed movies. It was a turning point that influenced how we consume sports programming today.”