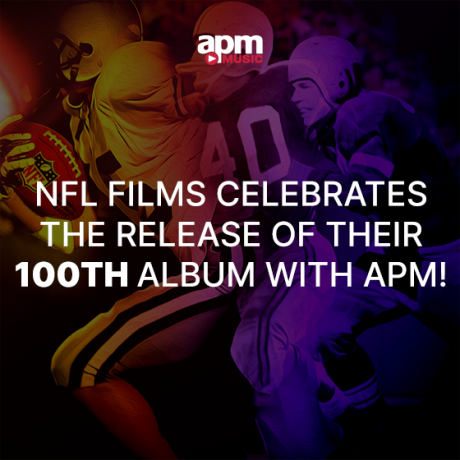 The NFL Films music catalog is one of the most recognizable and influential in the sports entertainment industry. With the NFL Films 100th album and Evolution series soon to be released, we discuss what industry professionals and audiences can expect. Composers Ryan P. Scully and the legendary Dave Robidoux, Composer and Music Director for NFL Films also describe the creative process, mood, and emotions they hope to convey, share behind the scenes anecdotes from these musical sessions, and much more.

As we approach the release of NFL Films 100th album and the Evolution series, what does it mean to you to hit this milestone?

To NFL Films, it’s a testament to our partnership with APM. The industry has changed so many times and the commitment between the NFL and APM has always been there. NFL Films music is unique, but it works far beyond just football. The ability of APM to expose our music to such a diverse group of creators has opened up even our eyes to the possible uses for our music. Over the years, it’s been amazing to hear a Sam Spence piece underscore a Sponge Bob scene or a big NFL melody become a mnemonic for Little Caesar’s commercials.

What is the Evolution series and what can we expect?

The Evolution Series is meant to show how NFL music has evolved with the times but kept the core elements of what makes NFL music so identifiable, a memorable melody and drama. The Evolution Series is a glimpse at how we create a score for one of our films. Much like Hollywood, we always start with the development of our main themes, and then we build a musical score around those themes, varying emotions, and genres to underscore the film.

What are some standout albums from the NFL Films library that really represent the catalog best and why?

NFL 002, 004, and 005 started it all, it’s classic Sam Spence, the sound that defined NFL Films and influenced all of Sports music. Tom Hedden’s NFL-003 Cinema Score has become a classic, pure NFL Films at its best. The Road To The Championship series is our largest series in the library with seven volumes starting with NFL-060. The series has become some of the most used NFL pieces, capturing the iconic modern NFL Films style.

Could you describe your creative process on the basis of a piece or this album?

Creating the main themes is always the priority. Because the production side of TV happens so quickly, we’re brought into the creative process very early on during the concept phase of the film. There are many discussions with the filmmakers to get a feel for the film and what the music needs to do to help underscore the emotion. Once those musical themes are created, we work much like a feature film composer by using those themes as we create emotional underscores for the film. Some pieces are pre-scored before the film is edited and others are post-scored after the final film edit.

Where did the idea for this series come from or what inspiration did you draw from?

Reaching the number 100 makes anyone look back at the road that got them there. We felt inspired to show where we are today, the evolution from the early Sam Spence sounds of NFL-004 & NFL-005. We’re proud we never followed the crowd or the latest trend, we always did what the film needed and in the style of NFL Films by never compromising on the identifiable melody. It keeps us unique and in the end, that’s what gives you the longevity to reach a milestone like 100.

What does the album’s title 'Evolution' reveal, if anything, about the album’s impact and themes?

We want people to get a sense of change and progress by looking at the cover and title. It still has the core elements of the old NFL music from NFL-004, but it has evolved into modern-day production. The music still comes from the same lineage, it’s just traveled a long road to this point.


Do you detect any clear purpose in the way the album is structured? Is there a sense of progression or grouping?

We tried to group the releases to help clients absorb the main themes on NFL100 and then be able to easily find pieces that are thematically built on those themes on the companion releases, NFL101 and NFL102.

What were some of your favorite songs to compose and why?

Retribution was probably my favorite piece to write. It’s the aspect of football that really draws me in. Those huge playoff games where everything is on the line. It’s a battle and for some players, the stage is too big but a select few rise to the occasion in heroic ways and we as storytellers, turn them into legends. Man Of War was probably my next favorite to write. They wanted a real lyrical melody to drive it. The horn players in the session had a lot of fun playing it because they love parts that put them out front in such a powerful way.

Any overall theme of mood that you're trying to capture while writing songs?

We get asked to write almost every emotion for our films. As Steve Sabol would always say, our films are about the human stories in life, they just happen to be set against the backdrop of football. Though we do write emotionally ambiguous music sometimes, most of the time our music has a clear emotion. It may go between several emotions in a single piece, but there’s no denying what we’re trying to make the listener feel in each section.

Are there any 'crazy' behind-the-scenes anecdotes from these sessions that you can share with us?

TV production has always been crazy. Trying to record a live orchestra for TV production that coincides with the end of an NFL season, is even crazier. We’ve developed so many techniques and protocols to get it done at a high level and on time. Every step is started before the last step is finished. I’m writing before the film is done, we’re orchestrating some pieces while recording is started, the film mix is started with reference music before the final music is done. Everything is adapted to enable us to record live musicians. It’s important for us to have that human element in our music, it’s what gives it dynamics and drama. It’s costly and requires a lot of work, but the end results help the music connect with people.

How would you describe the sound of your new series to any potential creative or client?

Can you give us your top 3 tracks and tell us how creatives could use those said tracks in their content?

Ascendance - It starts with a mood that changes depending on the visuals it’s put against and then begins to transition into a feeling of progress, ultimately paying off with the sense of accomplishment.

We Came Close - Its feel is less orchestral than the main theme version. It still has some drama to it but it can also add energy to a scene. It has a real united feel to it.


Hoping For Retribution - An emotional beginning section that is sad and hopeful at the same time. The undercurrent gives a sense of time passing. The middle section dramatically shifts to a feeling of rebirth before it shifts back and ends on the reflective beginning section.

When the NFL Films 100th album and Evolution series is released it is guaranteed to be a hit with football fans and sports creatives alike. With core elements of classic NFL music tracks from NFL 004, but also modern-day production, the music still comes from the same lineage.

Scully and Robidoux list Retribution and Man Of War as their favorite pieces to write, but with tracks like Ascendance, We Came Close, and Hoping For Retribution, evoking emotion, you can’t go wrong with any of the tracks. As Steve Sabol would say, the films are about the human stories in life, but just happen to be set against the backdrop of football.

"Congratulations to the NFL Films Library for hitting the century mark! It's an honor to represent the crown jewel of Sports Entertainment music. Cheers!"