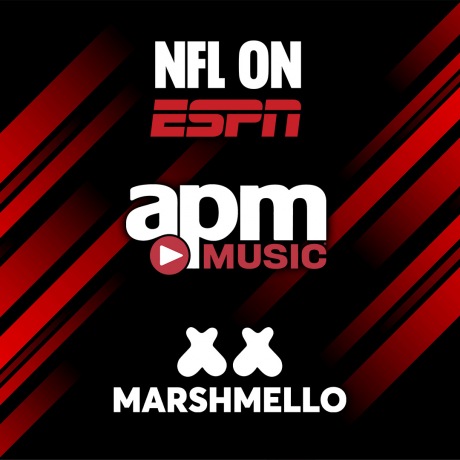 APM Music is partnering with ESPN and GRAMMY-nominated artist Marshmello to create a remixed version of “Heavy Action,” the iconic and long-time theme song of Monday Night Football. The song debuted in full during ESPN and ABC’s MNF broadcast on Monday, September 12th, and will continue to kick off each MNF broadcast of the 2022 season.

“Everyone at APM is thrilled to hear the evolution of our most widely known copyright,” said Matthew Gutknecht, Director of Sports Entertainment at APM Music. “To see how the sound has evolved and has been intertwined in pop culture over generations is a marvel to witness. I believe this is the beginning of a new chapter and can’t wait to contribute to it!”

“Heavy Action” was written in 1970 by the late great British composer Johnny Pearson. Since 1975, it has served as the opening theme song for Monday Night Football. The track followed Monday Night Football when it moved from ABC to ESPN in 2006. The original track is part of the KPM Music library and is controlled by APM, while Marshmello’s remix is licensed exclusively by APM.

"Our goal was to take the classic Monday Night Football music and add a contemporary vibe to it," explained Kevin Wilson, ESPN Creative Music Director. "To get there, we wanted to enlist an artist, a move we have never previously done with a 'Heavy Action' remix."

"Working with ESPN is a dream come true as Monday Night Football and the NFL have been a part of my life ever since I can remember," said Marshmello. "Having the opportunity to put my own spin on an iconic song that NFL fans everywhere recognize was an amazing opportunity."

"Marshmello, with his distinctive modern sounds and artistry, was the perfect artist to collaborate with," added Joanne Strange, ESPN's Music Operations Supervisor. "Fans will hear the classic MNF theme music they have been accustomed to with added energy and pace."

Marshmello will also serve as ESPN’s official music curator for the 2022 season and will feature music that captures the intensity of Monday Night Football, the teams, and the matchups.

APM Music has the world’s largest and deepest production music library, with over one million tracks available for licensing. For 40 years, APM has provided a full range of music services including custom scoring and a dedicated team of Music Directors for expert research. APM proudly partners with the majority of NFL, NHL, MLB, NBA, and MLS teams, NFL Films, and Power 5 athletic programs.

GRAMMY-nominated Marshmello's star continues to rise as the famously masked artist breaks boundaries across the industry. With chart-topping singles and collaborations, Marshmello has clocked a staggering 13 billion streams across Spotify alone. With over 45 million monthly listeners on the platform, he's one of the top 40 most streamed artists in the world on Spotify and the third-most- subscribed artist on YouTube. Most recently, Marshmello teamed up with Khalid to release “Numb,” which sits in the top 50 of the Billboard Hot 100 list and received an MTV VMA nomination for “Song of the Summer.”

KPM Music is a legendary music library, known as the high-quality benchmark for production music. KPM's composers, including Keith Mansfield, Alan Hawkshaw, and Brian Bennett, have made music featured in many movies and television programs worldwide. The company’s origins date back to 1830, and was formed by the merger of KPM and Musichouse. KPM Musichouse rebranded as EMI Production Music in 2011 and again as KPM Music in 2021. It is part of Sony Music Publishing and is represented by APM Music in the United States.