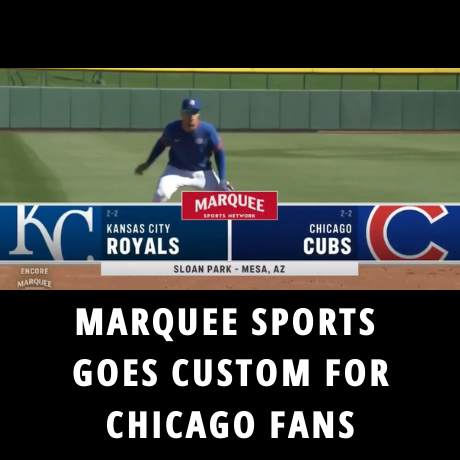 Blues legends Buddy Guy and Muddy Waters, jazz icon Nat King Cole, the soulful sounds and rock rhythms of Earth, Wind, and Fire, and REO Speedwagon. Even more recent names like Smashing Pumpkins and Kanye West are all synonymous with the rich history of the Chicago music scene. When Marquee Sports Network, the home of Chicago Cubs baseball launched earlier this year, it was only fitting that they combined the rich history of the team and the music of illustrious clubs in America’s Second City.

“It was very important to us,” Marquee Sports Network General Manager Mike McCarthy said. “The passion that exists among Cubs fans also exists among Chicago music fans. No two Cubs fans are the same - they are different from each other and come in all shapes and sizes; they span generations and vary in age and transcend the culture in Chicago. Music in this city is the same way.” The people of Chicago don’t passively approach music, just like Cubs’ fans aren’t fair-weather fans. McCarthy and his team reached out to APM Music to create a custom piece for the network which included four variations, rock, jazz/blues, EDM, and a hybrid version.

“They were looking for a custom music theme package with a stand-alone mnemonic (4-7 second hook) for the Chicago Cubs,” said Connie Red, Former Director, Custom Music Development for APM. “The theme needed to appeal to both a younger and older audience as well as have the sweet feel of Chicago blues/jazz with grand orchestral influences.

Composer’s Cut: Behind the Music

Composer Steve Ouimette teamed up with Oliver Spencer who brought the orchestral music and Jonathan Monroy who worked on the mixing and mastering in putting together the pieces. For Ouimette, much like in a song, the first step was to create a hook, a melody that would stick in the viewers’ head. “Can you sing along or chant it out loud, and does it get you excited,” he said. “That was the key ingredient for the theme translating to different genres of music. If you hear the melody and it’s memorable then it can translate universally, no matter what style.”

To create several variations of the theme and incorporate Chicago’s rich music scene didn’t post a challenge for Ouimette and his team. For them, it was just a matter of finding elements that would celebrate that sound. “Whether it was a gritty electric guitar, harmonica, or even the sound of the drums, we tried to blend tradition with modern sounds to keep things fresh,” he added. “The main theme is a hybrid of orchestral and blues-rock and the track just came alive as soon as Oliver Spencer brought his orchestral magic to it.”

The first time Ouimette and Spencer had the track together, he knew it was right, and I felt complete. So much so that the hair on the back of his neck stood up. It was then he knew that they had the foundation and could move onto the other genres. “Hard rock is my wheelhouse so that was really fun,” he said. “I had recently wrapped up a hip-hop album, so it was the perfect opportunity to translate the theme over. Finally, the blues track was a matter of choosing a style that fit in with Chicago. I opted for an electric blues because it felt right for this particular theme.” As a composer the message and emotion that they were trying to invoke in these pieces were simple. “Excitement and pride,” he said. “Chicago is a hardcore loyal town and I wanted to create a theme that’s both memorable and that makes you want to get up on your feet and shout and chant! Something to unify the fans. “The end result was a cohesive dynamic sports package.”

The mission behind Marquee Sports is to give Cubs fans what they so richly deserve and desire, a network as dedicated to the team as they are. Thanks to a partnership with Sinclair and the Cubs, fans now have a network devoted to the team, a destination for unprecedented access, Cubs-centric content, and game broadcasts second to none. McCarthy is also hoping the new theme engages the audience. “Music evokes and triggers emotion and is often the way people mark time and events and history,” McCarthy said. “Sports are fun and meant to bring out emotions; that’s what we wanted these scores to represent. When you hear any version of our theme, we want you to have thoughts of good times, the Cubs and Marquee Sports Network. McCarthy added that he hopes their partnership with APM can continue to evolve just like the music industry itself.

“Our theme is now a baseline for our productions moving forward,” he noted. “Plus, we hope that what we’ve created with APM can be taken to other networks to show how working in collaboration can be beneficial for their properties.” When Cubs fans here the theme, it’s as if they are stepping into a local Chicago club. It’s the reason the traditional blues instrumentation is so frequent in the theme. McCarthy thinks fans will enjoy it so much he wanted his own personal copy of the score. “How can I get a copy of the sheet music,” he asked the folks at APM. “Seriously, I’d like to get it framed for the office.”