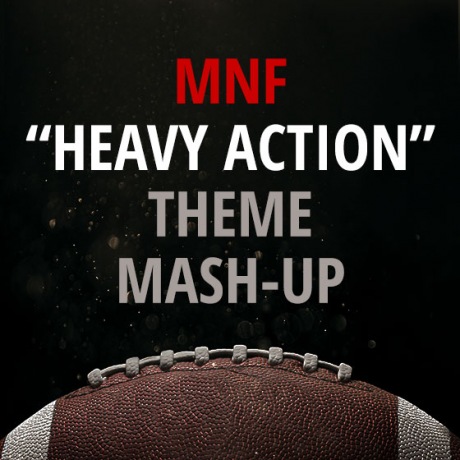 Music and sports are synonymous with one another.  From highlight reels to stadium intros of your favorite players, and the soundtrack to some of your favorite productions like NFL Films and Monday Night Football. It’s those tracks that convey the raw emotion, the emotion that transforms you from being a spectator on your couch, and into the heart of the action.

One of the most iconic songs and prolific intros in all of sports is the Monday Night Football theme, also known as “Heavy Action”. Other than its legendary four beats and a fermata (pause), the average listener, sports fan, and music aficionado may not know about its humble beginnings, which started in the 1970s.

The best form of advertising is when you hear the music and can instantly identify the product. Nothing is truer than in the case of Monday Night Football and the most well-known soundtrack in sport. The next time you sit back to watch your favorite teams duke it out on the gridiron, you can impress your buddies before the game kicks off by knowing the history of “Heavy Action”.

It was composed in 1970 by Johnny Pearson, a British man who passed away in 2011. Pearson’s audio engineer and producer Adrian Kerridge described the music, as, “very punchy, very lively, and in your face really.” Ironically, it wasn’t originally created for football, but rather for the BBC’s music library and the commercial market in the UK.

The track has had much success, beginning as the theme to the BBC’s Superstars series. ABC licensed the track and used it regularly as the opening theme music to Monday Night Football throughout the 1970s. Years later, when an employee for ABC heard “Heavy Action” in a music publisher’s library, the network ditched its original, Hammond organ-driven Monday Night Football theme in favor of Pearson's ditty.

The ABC network first aired Monday Night Football on September 21, 1970, with a game between the New York Jets and the Cleveland Browns. The program’s longevity gives it the title of second-longest-running prime time show on American broadcast network television-right behind CBS’s 60 Minutes.


“In my naivety, I have to tell you I knew it was big, but I didn’t know how big it was until I was told,” Kerridge said.

Not only did “Heavy Action” impact British background music, but it set the tone for the NFL and how they perceived tracks in all aspects of production and set the tone for highlight reels, motion pictures, and multiple uses across sports and entertainment.

Nineteen years later, in 1989, Edd Kalehoff arranged a new version of “Heavy Action” that would be used for the program’s final year’s on ABC; this new version became the program’s official theme and was also used as background music during Howard Cosell’s halftime segment.

Music and sports go hand in hand.  When you are watching a sporting event you feel emotion. The sorrow and agony of a loss, the gut-wrenching of a close game, the passion with the cheerleaders and pageantry, and the excitement of victory. “Heavy Action” and sports libraries have enhanced that feeling and allowed viewers to feel as if they are in the moment.

If you are interested in adding “Heavy Action” to your arsenal you can. Although ESPN owns the rights to the custom versions of “Heavy Action” which were recorded with The London Philharmonic at the iconic Abbey Road Studios, the original version can be licensed directly through our catalog at APM Music.

>Listen to more versions of "Heavy Action" in APM Search