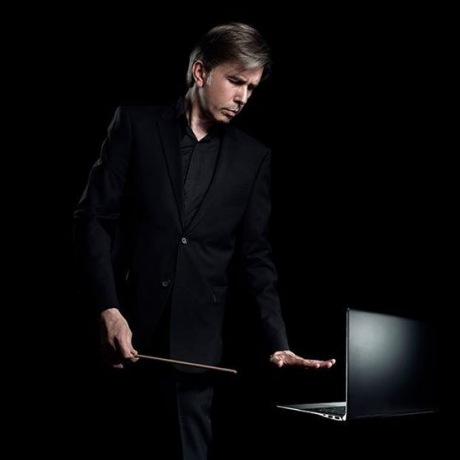 Over the course of a year, Composer Bruno Alexiu filmed 52 landscapes with the changing of the seasons. And for each film, he composed and recorded an orchestral work. The result is this fine collection of "symphonic landscapes" in a series called Natural Movements.

>Listen to the series here

Cezame recently caught up with Alexiu to discuss the project.

1. Can you explain to me in a few words the idea behind the Total Virtual Orchestra and tell us how long you have been working on it?

The Total Virtual Orchestra makes it possible to have all the virtual instruments of the symphonic orchestra at your disposal in a dedicated recording room, which is also virtual.

The best playing styles of the best virtual instrument banks have been selected (legato, spiccato, pizzicato, sforzando, détaché… up to 50 per instrument), and a whole modelled room has been created (instrument position, room dimensions, interaction of instruments with each other, etc.).

Using specific automation for each instrument (velocity, vibrato, nuances, attenuation filters, etc.), the ensemble enables "live" composition, with each solo instrument, each group in its proper position, and responding musically in the same way as a real symphonic orchestra. The result is an immediate and definitive formal result, totally modular, in order to meet editors' and director's progressive needs.

The installation requires 5 ultra-powerful computers and 400 correction and spatial arrangement plug-ins, amongst other things, and offers all orchestral instruments without exception, with over a thousand playing styles.

I have been working on improving this virtual ensemble constantly since 2011, when I permanently gave up on the notion of a scale model and cut-rate acoustic recording.

2. How did you get the idea to create the project and the "Natural Movement" YouTube channel?

As a former student of the Paris School of Decorative Arts, with a  video directing degree under my belt, my first professional encounter was with... Frédéric Leibovitz, who was head of Koka média at the time. Thanks to him and his encouragement and help, things soon went so well that music (set to pictures) became my main activity. But I always wanted to film again.

In recent years, Frédéric inspired me to make an album of more personal, more intimate music, in the form of my choice. This was a real opportunity for me, and I wanted to combine it with pictures.

The idea for Natural Movements came to me one day, I called Frédéric the next day, and explained the challenge of the 52 sequences to him, a film and a piece of music each week! He agreed immediately. Eight days later, after dozens of hours' technical viewing in order to get the best video material, I was all set for the project. Two days later, I filmed sequence 01, "A cold morning"...

3. On this project, did you first think of the music and then produce the images, or did you film the images and then imagine the music?

The idea is based on the founding principle of complete expression (from the moment the camera is triggered to the final recording of the music) but also with an interior/exterior duality.

I actually felt the need to "get out" of my composer's studio in order to return to the nature that's so dear to me, with its spectacle and its cyclical renewal. I think the same phenomenon must have happened when the first naturalist painters went out of their studios to set up their easel in the middle of nature, surrounded by the colours and light.

Secondly, once I had the sequence, I needed to bring in a second emotion, musical this time. In front of each natural tableau, my ambition was to offer a new sensation, an emotion "in retrospect", by finalising the sequence as if it were a happy memory.