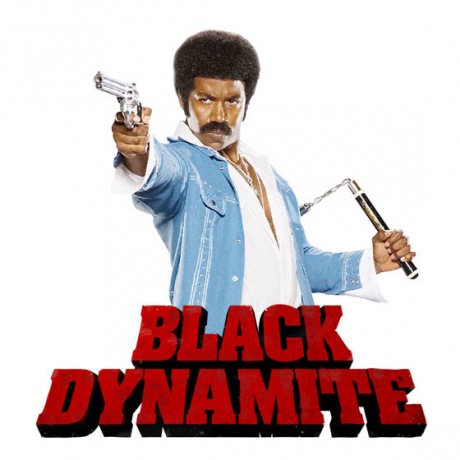 The film, Black Dynamite, has scenes filled with KPM music!

The following contains excerpts from the liner notes of the soundtrack of Black Dynamite, coming out on WaxPoetics Records October 20, 2009. Black Dynamite to be released October 16, 2009.

"The [KPM Music] 1000 series contains many essential library funk and electronic LPs, including The Big Beat volumes one and two, and Afro Rock, and is largely understood as setting the standard for library music internationally. Of the many great library LPs produced in this field, few are as superlative as Alan Tew's Drama Suite volumes one and two (TIM 1024 and 1025), from which most of the tracks on this CD have been taken. The original LPs were issued in the 1970s on the Themes International label and consist of music that was originally commissioned for the Yorkshire TV cop drama The Hanged Man. Like much of the British (and German) library music of the period, they were recorded in Munich, Germany, at Studio M, using what was to become the standard Themes lineup: Mike Moran and Alan Hawkshaw (keyboards), Barry Morgan (drums), Les Hurdle (bass guitar), and Frank Ricotti (Latin and tuned percussion), plus the Max Gregor orchestra, with Tew composing, arranging, conducting, and producing all of the tracks. Permutations of the above lineup, sans Tew, appear on countless KPM, Themes, and Bruton releases. Tew is one of only a few library artists who did not perform any of his own compositions but instead remained behind the mixing board in complete control of the sessions. Needless to say, the recording techniques and analog studio gear used on these sessions was the stuff of legend, and cannot be matched or even emulated by today's digital standards.

Drama Suite volumes 1 and 2 went on to become memorable TV music in the U.K. on cop shows like The Hanged Man, Van Der Valk, The Two Ronnies, and The Sweeney, but the music became indelibly etched into the American collective consciousness in 1981, when it became the opening theme song for The People's Court. As the Alan Tew Orchestra, Tew commercially released a number of LPs, with him conducting and arranging big band covers of popular tunes of the 1970s.

Alan Hawkshaw is universally recognized as one of the undisputed giants of library music and has created a massive body of work (library and otherwise) of all kinds. Amongst funk collectors the world over, he is known as the man behind the Mohawks' The Champ, an LP collection of library organ funk tracks commercially released in the U.K. by KPM in 1968. As musical director, arranger, and performer, he has enjoyed fruitful collaborations with Serge Gainsbourg, Jane Birkin, and Catherine Denueve, among many others.

The future of vintage library music is looking bright-these once forgotten nuggets are finally finding their way back onto screens large and small everywhere. And there is no motion picture more suited to a soundtrack of continuous library cop funk heat than "Black Dynamite!"