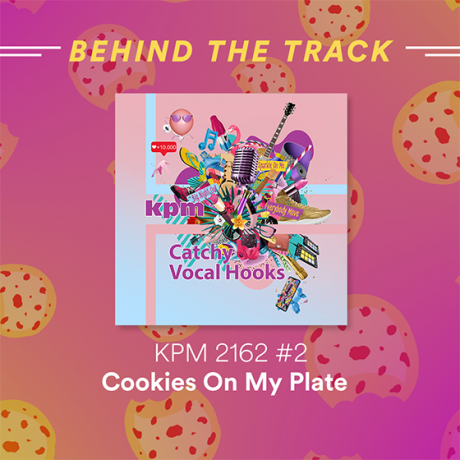 Writing a catchy hook is absolutely an art form in and of itself. While years spent developing one's craft is a necessary part of the puzzle, sometimes the missing piece to kickstarting the creative process is simply being in the right place, at the right time. Like many mediums of artistic expression, some of our best ideas come when we're not necessarily expecting inspiration to strike. For Brighton, UK-based award-winning composer and musician Richard Mead, this was the case with one of his recent compositions, an infectious song titled "Cookies On My Plate."

The track, which is part of the KPM Main Series album Catchy Vocal Hooks (KPM-2162), was made possible by an unlikely collaborator: Mead's then seven-year-old daughter, Lily. As Mead proudly recalls, his daughter played a key role in the development of this song, helping bring it from an idea fully to fruition.

"One day my daughter Lily was playing a computer game on her tablet," Mead shares of the track's initial conception. "I’m not sure exactly what the game was, but it was one of those games where there is no real aim; you just cut and style a character’s hair, or you bake something and then decorate it. I was in the kitchen and I heard her half-sing, half-rap: ‘Cookies on my plate, I got cookies on my plate!’ in a funny voice. My ears pricked up immediately, and I thought, 'That’s a hook!’"

Not only did Mead encourage his daughter's own creativity by taking her idea seriously, but he even went the extra mile, offering her the opportunity to join him in the studio and record vocals for the song. After he crafted the rough beat for the track, Lily sang the hook, with the father-daughter duo having the most fun throughout the recording process. Such joy can be heard throughout the track, so it’s no surprise to the song has since struck a chord with others!

"It was pretty funny, and I remember dancing around a bit to get her psyched up to do it," Mead recalls. "We then realized we needed another line, so the hook was finished off with 'Why you gonna make me wait?!' I was pretty pleased with the lyrics: on the one hand, it’s a little girl singing about how she can’t wait to eat her cookie, but I also like the interpretation that to have 'cookies on your plate' means you’re 'doing fine.'"

"Now we gotta get this into the Urban Dictionary right?!" Mead says, with a laugh.

Whether the song's lyrical content is interpreted as silly or more serious, the end result of this spontaneous experiment is a track that hits all the criteria for being an infectious earworm. Just take one listen, and chances are, it'll instantly improve your mood and you'll likely get the lyrics stuck in your head. As Mead's expertise just so happens to lie in composing across genres, with a penchant for writing big bold pop anthems and catchy vocal hooks, he was quick to recognize that "Cookies On My Plate" was destined for bigger things and decided to create several alternate versions.

"My original vision was for it to be a trap track," Mead explains. "So it had a trap beat and a big hip-hop brass riff. I really liked the juxtaposition of a girl’s voice singing about cookies with a hard trap beat. It was fun and it made me laugh. I remember after we made this version playing it super loud in the car with the windows down, which made Lily scream with laughter and be embarrassed in equal measure."

As Mead continued to explore where this track could go, he called on collaborator Cayte Webber to give the song a bit more seasoning and character.

"After playing it to some people and getting some good reactions, I thought maybe there was something more in it," Mead says. "At the time I was writing the 'Catchy Vocal Hooks' album and I thought maybe it could have a home on there. So I started playing around with the funky guitar riff and I changed the beat to more of a pop/moombahton rhythm. Then one-day Cayte, who was doing some session vocals on some of the other 'Catchy Vocal Hooks' tracks, was in the studio and she mentioned she could rap. Cayte has worked on a lot of commercial pop tracks and mostly sings, but said she loves to bust out the odd rap. It was apparently just something she realized she could do one day. So I thought maybe it could really add something to the already-brilliant quirkiness of the track. Cayte wrote it in about 5 minutes and nailed it in the first or second take."

The rest, as they say, is history! Not only does this track have such an incredibly charming backstory, as well as is a testament to seeing what can come of such organic and lighthearted collaborations, but it is also an excellent burst of feel-good musical energy, perfect for scoring a range of productions. Mead, who is known for creating across genre lines, weaves together elements of pop, funk, contemporary R&B, and hip-hop, resulting in an energetic, quirky, whimsical, and upbeat song that is great for sound-tracking parties, leisure content, sports/fitness, and other lifestyle content.

Take a listen to the fan-favorite "Cookies On My Plate" by Richard Mead here!