Behind the scenes of Sonoton's Trailer Tracks series

Elisabeth Oei: The STT sessions [STT 15-20] were recorded in Sofia, Bulgaria with full orchestra and 40 voice choir. What was that experience like? 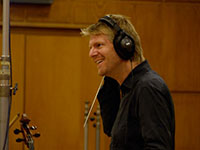 Gregor Narholz: Working with a real orchestra and its emotional power is breathtaking. The emotional depth and range is endless! I am very grateful to SONOTON that they understand what real musicians and real orchestras add to their music. It is a rare and exciting experience to be able to produce library trailer music on such a high level, just like my exclusive film score productions. It’s the real deal!

EO: The amount of music on these STT productions is enormous. What sort of days were you putting in?

GN:  Due to local scheduling issues we were sometimes forced to squeeze 9 hours of recording time into each day, utilizing two independent sets of brass players and strings. This way we always get – no matter what time of day or night it might be - the fresh, spirited and powerful performance trailer music demands! After all the long days and nights of composing, orchestrating and arranging the music, it was great to see it come to life at the scoring stage “Studio 1” at the Bulgarian Radio Studios in Sofia.

EO:  Sonoton used to record primarily in Budapest. When did this change?

GN:  For the last 4 years Sonoton has been a frequent visitor to Sofia and the Sofia Film Orchestra, a very well respected and reputable orchestra, featured in countless Hollywood productions and record albums.

EO:  So once you record the orchestra, you set up the studio for this amazing choir.

GN:  After the orchestral tracks have been recorded, the stage is cleared of (almost) all the mics and chairs to make room for another kind of special treat - the choir overdubs. Forty professional singers fill the stage and room with their powerful voices. I am always amazed at how much a symphonic choir can add to an already complete and epic orchestral track! Our solo vocalists draw their talent and sonority from their native cultures, coming from the Middle East, Russia, Germany and the United States.

EO:  In the case of STT 18 -Orchestral Rock, you brought in a live rock band to complete the basic recordings.

GN:  Absolutely. The rock group elements were produced by Bernhard Penzias, a renowned pop/rock producer with several hugely successful productions and gold/platinum records on his list of credits.

EO:  After the recording sessions, you have a great deal of work back in LA mixing and mastering all the tracks. This is a massive job – describe that process to us, and who you called upon to assist?

GN:  Back at home we add additional electronic sounds, percussion and so on, completing the musical arrangement and recording process.

Due to the demand for the high impact sound in current trailer music production, orchestral samples are mixed with the live orchestra to add punch where needed, without diminishing the emotional epic impact of the live orchestral sound. Special ultra-low bass frequencies are also added to explore the full cinematique sound spectrum.

Through the amazing ears and talents of our brilliant mixing teams in London (Mark Cousins), Munich (David Santiago) and Los Angeles (Greg Townley) the tracks get their final sound tweaking. We are especially proud to have had Greg Townley on board with us. His way of mixing and mastering trailer music has become The New Standard in Hollywood. Huge epic sounds, detailed but powerful without losing any of the emotional quality and dynamics of a real orchestra. Even on low volume and small speakers his mixes sound huge. Of course, a real theater will truly unleash the full sonic power of Greg’s mixes. His work can be heard in countless theatrical trailers and movie scores. Chances are one in three trailer scores you’ll hear is his mix!

EO:  Greg Townley weighed in on his experience mixing these STT tracks. Let’s hear what he had to say…

Greg Townley: When I first opened the sessions from Sonoton, I found myself looking at over 200 tracks of material that had to be mixed down to stereo...

After taking a breath, I rolled up my sleeves and went to work in a genre I know quite well having mixed virtually hundreds of large scale trailers such as these. After 4 hours designing the custom work-flow,I up-sampled the sessions to 96k immediately, then split the session into both of my ProTools HD rigs, putting the live orchestra and choir on one rig and all the perc, synths and the band on the other. Two systems were a must to handle the track count as well as the massive processing requirements.

How does one start with such a mountain of tracks? Top left hand corner I always say. To me the orchestra was first. At times it had to be broad in scope, other sections tight, compressed and punchy. Then the choir, huge and forceful, followed by mixing the percussion as aggressively as humanly possible. Then lastly the rock elements to deliver maximum impact. After all engines are firing I start to build the dynamics, depth, and the illusive front to back dimension. With that many frequencies involved one has to look at each piece in a 3 dimensional picture at all times. Placing elements side to side, top to bottom, front to back. It is the only way to get the impact a track like this requires.

In the end, we were very happy with the results!

GN:  That’s an understatement! I was thrilled!

EO: Mark Cousins and Adam Saunders were two of the other collaborators. Both of them relayed their experiences to us…

Adam and Mark greatly enjoyed recording two albums for the prestigious Sonoton Trailer Tracks series STT – Family Entertainment – Magical Adventures and Dark Heroes. The composers traveled to Sofia, Bulgaria where the full symphonic strength of the Bulgarian Film Orchestra and Chorus were used to create that huge, blockbuster Hollywood sound! With the ‘Dark Heroes’ album, this massive force was mixed in with cutting-edge, state-of-the-art electronica, programming and beats to create a mind-blowing contemporary action and drama album. Family Entertainment – Magical Adventures album concentrated on timeless, classic, lush Hollywood scoring – perfect for family movies! Each cue has been carefully written according to the requirements of the world’s top trailer houses, so the immediate usability of these albums is quite unprecedented. It’s quite easy to completely score a trailer from just one track or, using the specially created edit-points, create the perfect trailer soundtrack from several cues on the albums. These albums provide an opportunity for a true Hollywood orchestral soundtrack to accompany any trailer or promo, with a lavish production quality that is virtually unmatched.

Adam and Mark were greatly impressed with the magnificent performances given by the Bulgarian Film Orchestra and Choir, as well as enjoying working with the No.1 team of Sonoton experts, Gregor, David, Nicolo and Andreas! It was a thrilling time and one which Adam and Mark look forward to repeating soon…

EO:   There’s no question these 6 new STT productions are unprecedented in their scope and range of music and audio quality. It sounds like everyone involved had a blast, and Sonoton is fortunate to reap the rewards of this huge undertaking. Thank you Gregor for your immense contribution to Trailer Music!

GN: It was my pleasure!

The following are the names and more info for all the collaborators on STT 15-20:

Listen to and read more about the different STT Albums