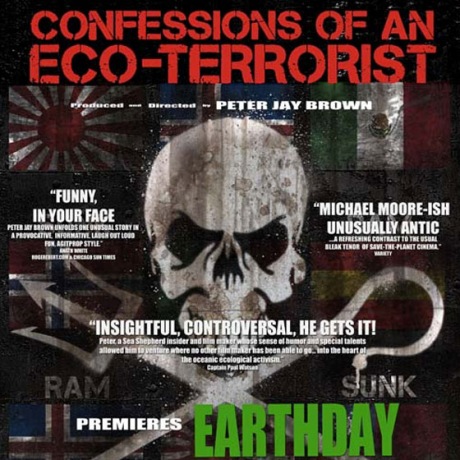 APM Music in Confessions of an Eco-Terrorist Film

APM Music sets the tone for drama on the high seas in the unique and controversial film, Confessions of an Eco-Terrorist, coming to theatres this fall.

>Tell me more about this film

Confessions of an Eco-Terrorist is not your typical eco-film. Seen through the eyes of activist, Peter Jay Brown (from Whale Wars), Confessions grants the viewer an intimate look at shipboard life amongst these self-proclaimed animal saviors and sea rebels, the ones who helped shape the Green Movement we know today.

Alongside Captain Paul Watson of the Sea Shepherd Conservation Society, Brown and fellow crew members' exploits are as much comedy as cause. These extremists proudly fly their version of the skull and crossbones while performing extraordinary feats of daring on the high seas. Their fleet of ships has, for thirty years, halted illegal fishing activities, inflicting damage to whalers, illegal drift-netters, long liners, and seal hunters operating illegally worldwide. Spanning across the continents, Peter Brown takes us on a journey through locations such as The North Pacific Ocean, Galapagos Islands, the Faroe Islands, and Norway, illuminating the whales' and seals' perils.

>What the press is saying about this film?

"Confessions of an Eco-Terrorist should strike just about everyone as a refreshing contrast to the usual bleak tenor of save-the-planet cinema."
- Variety

"Brown’s film is a peek behind the curtain: The activist often creates confrontation, but the documentarian must show the less-than-flattering bits. This film is a warts-and-all view of his involvement with the Sea Shepherd team since 1981, and it also deconstructs the classic political-movement film."
- Los Angeles Times

"This funny, insightful and controversial film was three decades in the making by Peter Brown, a Sea Shepherd insider and film maker whose sense of humor and special talents allowed him to venture where no other film maker has been able to go – into the heart of oceanic ecological activism."
- Captain Paul Watson

"As the longest serving crew member ever aboard the Sea Shepherd with a highly impressive personal resume and film career in his own right, Brown takes viewers into the lighter, more humorous aspects of the "eco-terrorist" sub-culture in his feature documentary film."
- Huffington Post

"Documentary footage is an invaluable tool that can be widely dispensed. In a war fought with images through the scope of the media, it’s the video that’s meant to be the shot not heard, but seen ‘round the world…. meant to win converts to the cause and to awaken foot soldiers everywhere."
- Jordan Sayles, Planet Magazine

>Watch the trailer for this film