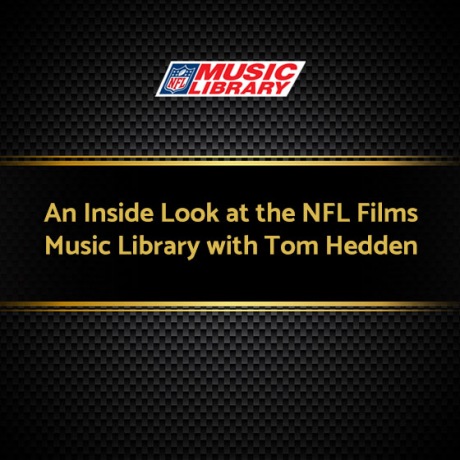 The NFL Films catalog is one of the most important in all of sports. We talked with Tom Hedden, the former Music Director at NFL Films and NFL Director of Music Administration, about the early influences of the music, the growth of the library, and how it has been transformative across the sports and media landscapes.

As someone who has been in the industry a while, how would you describe the music?

The NFL Films style is pretty different from “Sports Television” in general. It’s more like feature films than Sports Center. That means the music is a generally pretty big and dramatic, but the style transcends musical genres the same way film scoring does. There are lots of big orchestral tracks for sure, but there are “classic” NFL Films pieces that are rock and roll, electronica, big-band jazz, blues… nearly everything. Steve Sabol was a very creative guy and understood creative people. He wanted you to try things and not to fear failure.  That means that every composer who has written for the catalog has had considerable freedom to find new ways to help tell the stories of the NFL.

Would you say it may be even a little manipulative when evoking emotion?

Filmmaking is a coercive art form. The idea is to make the audience feel exactly what the director wants them to feel. Music is very powerful in this regard because it’s subliminal, it gets right into the mind of the viewer and shifts their point of view.  I’ve heard that smell is the most basic sense, it connects us with memory and emotion over the shortest neural pathways - just think about walking into a bakery or a coffee shop.  In film, music has to play that role because there’s no way of including smells. For NFL Films, this type of manipulation is crucial for overcoming the inherent bias of fans. If, for example, the story is about a Dallas Cowboy player, the music is what makes even a die-hard NY Giants fan respond exactly as the producer intends them to; it overwhelms the rivalry and the loyalty they have for their team and allows them to experience the emotion of the story.

What would NFL Films be without the music?


I think because his father, Ed, learned how to shoot film by covering his youth-league football games, Steve Sabol would say that without the music it’s just home movies. Everyone at NFL Films knows you have to do your small part of the puzzle as well as it can be done. It’s great to work in that atmosphere. The footage is beautiful, the sound is amazing, the writing is entertaining and insightful, the editing is tight and compelling, but the music is given a special significance and it shows. It’s valued as an integral part of the style, not an afterthought. NFL Films is about storytelling and music will always be one of the most powerful tools for telling moving and emotional stories on film.

You've worked closely with Steven Sabol. What influence has he had on you as well as NFL Films music?

Steve was an amazing man. He was an artist first and foremost, and his legacy was to show that using an artistic approach to pretty much everything, even within the corporate culture of the NFL, would still produce the best results. He was dedicated to the quality of the final product, that was the focus from the top down. The lasting importance of the NFL Films style, the innovations, the Emmy Awards…all of it results from that philosophy.

Another person you've worked closely with is David Robidoux. Talk about that relationship and his impact as well.

Dave’s talent may only be outpaced by his work ethic. Early on, I fought hard to get him away from the recording console and into the music department and he’s done amazing things with that opportunity. His sound IS the NFL sound and there are a lot of composers working now who owe him a great creative debt.  He’s innovative as a producer as well. The mountain of awards he’s earned shows that NFL Films music is in very capable hands.

How have you seen the library grow over the years?

Over the years, the library has grown and developed and served to help create the funding to produce more and more music for the NFL. The philosophy has always been very simple: make high quality music that the producers, editors and filmmakers at NFL Films will love to use, marry the music to great images and stories, let the audience fall in love with the music and associate it with the great films, and then make it available to the production world through APM Music.  Once the money comes in, use it to fund the creation of more music. Over the years, there has been some experimentation with mixed results, but in general, the formula is still the same. NFL Films makes an amazing product that is well regarded throughout television and sports. The music has always been a big part of that.

Where would you say its place in sports history and sports music is?

This probably can’t be overstated, it’s the most important catalog in all of sports.  Everything else will always be measured against NFL Films music.