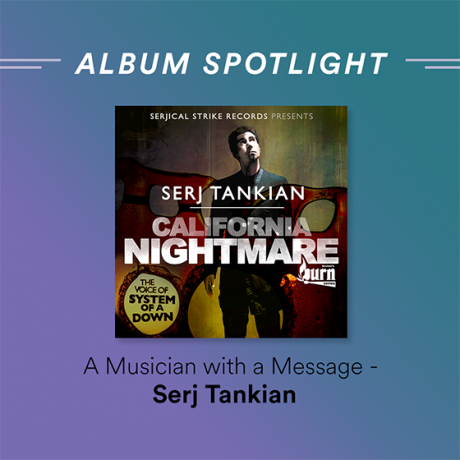 A Musician with a Message: Serj Tankian

The System of a Down frontman, composer, and activist has released a new commercial solo EP and is featured in a new documentary chronicling his advocacy work

Behind APM Music's vibrant and voluminous catalog of recorded music is, of course, a brilliant network of some of the most creative, inspiring and talented composers in the world. Among them is none other than Serj Tankian, who in addition to being the frontman of System of a Down, is a songwriter, record producer, and longtime activist with a penchant for using music as a vehicle for igniting conversations that spark tangible social and political change.

This February, Tankian's dedication to raising awareness of social injustices on a global scale—through his artistry and activism alike—was highlighted in a new documentary, aptly titled Truth to Power. The documentary, which features an original soundtrack composed by Tankian and was directed by Los Angeles-based Armenian American filmmaker Garin Hovannisian, doubles as an artist portrait and a behind-the-scenes look into his advocacy work, which for decades has been focused on his deeply personal fight to have the Armenian Genocide formally recognized by all governments.

"Whatever statement I make is based on an injustice occurring somewhere that I want to rectify," Tankian can be heard saying in the documentary's official trailer. "I don’t think about what I’m going to say, how I’m going to say it, I just open my mouth and it comes out."

Tankian, whose four grandparents were survivors of the Armenian Genocide that horrifically took place during World War I and took the lives of over one million Armenians, first began speaking out about the systemic mass murder and ethnic cleansing during his college years, serving as the president of California State University's Armenian Students Association. In the years that followed, as Tankian leaned into the career of a full-time musician and began to experience widespread success with System of a Down, his passion for humanitarian causes further intensified. Truth to Power provides an inside glimpse into how Tankian's creative process and activism collide, with commentary from his bandmates, legendary producer Rick Rubin and Rage Against the Machine's Tom Morello, the latter of whom he co-founded the Axis of Justice nonprofit organization.

In addition to highlighting how Tankian and his System of Down bandmates guitarist-vocalist Daron Malakian, bassist-vocalist Shavo Odadjian, and drummer John Dolmayan consciously use their time on the stage and in the spotlight alike to bring awareness to a range of important issues, the documentary also highlights some of the risks that come along with choosing the path they have. Over the years, the band has received an array of death threats and experienced other repercussions as a result of choosing not to "just shut up and sing," as Tankian puts it. However, as Tankian explained during a recent interview with the Pasadena Star News, "We’ve been witnesses to huge invasions, human rights tragedies, war, and genocide, and for us not to speak out because it affects our job would be undermining humanity."

"And what are the fruits of the labor," Tankian asked rhetorically, during his recent conversation with Pasadena Star News' Kelli Skye Fadroski. "Well, recognition of the Armenian Genocide by the U.S. Congress in December 2019 … that was an activist dream come true. That was something we’ve struggled for awareness for many, many years with all of the guys in the band and myself. It was an affirmation of all the efforts and now it’s a good opportunity for the new Biden administration to take that and run with it and do an executive recognition, a proper recognition, of the Armenian Genocide on April 24, which is the day of commemoration."

With hard work paying off and reinforcing the importance of standing strong in one's beliefs, Tankian continues to apply the pressure, finding captivating ways to weave politically-driven messages into his music. The song, "Electric Yerevan," for instance, was directly inspired by System of a Down being able to perform in Armenia for the first time in 2015, the same year as the centennial of the Armenian Genocide. The solo track, which appears both in Truth to Power and on Tankian's new Elasticity EP, calls out corruption, capturing the energy of the protests that took place in 2015 in response to unjust electricity rate hikes and epidemic economic strife.

Tankian's latest solo work, a five-track EP that includes a beautiful homage to his son ("Rumi"), is out on Friday, March 19. The documentary, Truth to Power, is set to be released on video on demand on April 27. This past fall, System of a Down recorded its first new music in 15 years, "Protect the Land" and "Genocidal Humanoidz," with all proceeds going to the Armenia Fund to provide immediate aid to those in need in Artsakh and Armenia. Currently, System of a Down is slated to play live this October alongside Korn, Faith No More, and Helmet this October at the Banc of California Stadium in Los Angeles, dependent on how the covid-19 vaccine rollout goes.

In addition to exploring his passions with System of a Down and as a solo recording artist alike, Tankian's impressive range as a musician also extends into the world of production music. In 2012, he wrote and produced California Nightmare, an experimental collection of thrash metal, Eastern-influenced rock, and dark ambient prog rock. The high-energy album, available as part of the Bruton (BR) library, further showcases Tankian's chameleon-like ability to rise to the occasion and deliver incredible music across a variety of genres, all while remaining impassioned, fearlessly unapologetic, and as authentic as ever.