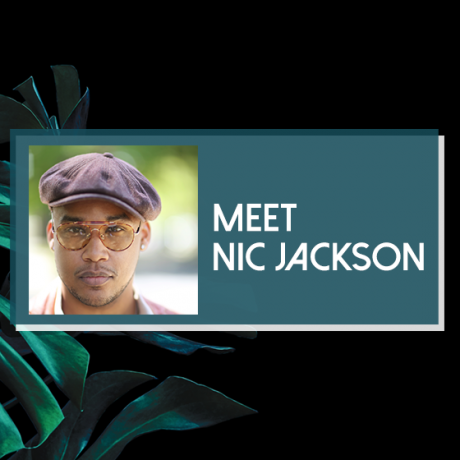 Breakthrough artist Nic Jackson has never been one to shy away from telling the truth in his music. Drawing inspiration from musical family legacy and artists like Michael Jackson, Stevie Wonder, Prince, and Marvin Gaye, Jackson's life focus has always been about bringing his passion for music to life. His original music consists of a unique blend of Soul, Funk, and R&B sounds that bring a unique, old-school feel to modern day music.

After moving to Los Angeles in 2005, Jackson studied vocals and piano at the Musicians Institute while also booking gigs all across LA. His work in performing and collaborating with artists such as Stevie Wonder and the Grammy Award-winning group, A Taste of Honey, has led him to pursue including writing and producing music of his own. His songs "Dancing With You" and "Danger" are featured on New Wave R&B in the Royal Blood Records music library on APM. Whether he's composing at the piano or acting in Hollywood, Jackson's music sonically showcases how his artistry brings a soulful authenticity to every creative project he works on.

To celebrate his virtual home performance with APM Music available on YouTube Friday, February 26, Nic Jackson also gave us a behind-the-scenes look at the making of his music, what inspires his songs, and the inspiration that drives his musical journey.

What genres of music influence your composition and/or songwriting
the most?

What was the inspiration behind “Dancing With You”? How did it
feel to you to record it and bring the track to life?

“Dancing With You” was already a work in progress by the time I became involved with the song. The beat by Jhay C and the melody by Darryl Gervais were already in place. So when they asked me to sing and help finish writing it, I just envisioned this sexy Hungarian doctor I was dating when the shutdown first happened in 2020. We’d already broken up by the time the song came my way, but I had a lot of fond memories of not only dancing WITH her during quarantine, but she used to love to put on a show and dance FOR me. Now I think about her whenever I hear that song!

Was there a music scene in your hometown of Sacramento that inspired you or shaped how you approach music today?

I’m sure there was a great music scene in Sacramento when I was coming up because there definitely is now. But I left town at such a young age, I never really got a chance to experience it. All my hometown inspiration came from the music my parents played in the house, as well as my high school years spent studying under the direction of Curtis Gaesser in the Folsom High jazz program. My mom, who is an extremely gifted singer in her own right, provided the Jackson 5, Motown, Luther Vandross, Anita Baker, Teddy Pendergrass, Sly & The Family Stone, etc... and my father provided ALL the jazz, both vocal and instrumental, EW&F, Donny Hathaway, Ohio Players, Aretha Franklin, Curtis Mayfield, Sam Cooke, Jackie Wilson, and James Brown, just to name a few!

Who are some artists you turn to for inspiration?

There are definitely more than a few, but primarily, I turn to my Auntie Janice-Marie Johnson of A Taste of Honey for inspiration. She’s been so successful and I want so badly to follow in her footsteps and carry on the musical legacy my family has.

How did you first get started working in the music industry?

I moved to LA in September 2005 to attend the Musicians Institute in Hollywood CA. Even though my friends at school and I were still students, I was very fortunate to have a family friend who just opened a restaurant in Santa Monica, and he offered up his establishment as a place where my friends and I could perform publicly! We were there from 2006-2007 or 2008, but that’s definitely where we put in our 20,000 hours and polished our live performance chops. My friends started getting hired on major tours, whereas I began to work more gigs in town and all over Southern California. Eventually, I’d open for Mint Condition in 2012 and Blackstreet in 2013 at The Nova in LA, but the grind never stops.


Was there ever a time when watching TV or Film where you noticed that the music helped tell the on-screen story?

Probably when I was watching The Wiz, SchoolHouse Rock, or Sesame Street. They were always pretty good about using a song to paint the picture of the message they were trying to get across.

What was the creative process like when writing and recording your song “Danger?”

This particular process was extremely fun for me. The producer of “Danger”, Jhay C, told me he was working on an R&B album for APM music and he needed various writers to help complete the project. I reached out to my good friend, singer/songwriter/artist Dani’ Wright to help me with the writing. I love working with her because we have such a rich history of pumping out great songs together. She’s one of my favorite people to collaborate with, so whenever I get the chance, I love working with her. At Dani’s studio with Nate, another co-writer, and Jhay sent over various tracks for us to choose from. When we heard the track for “Danger” the notes in the memo instructed us to use words like “risqué, roll the dice on love, putting it all on the line, risk it all, placing my bet on you, gambling...” and so on. Basically, instead of gambling with your money, you’re gambling with your heart. So with that in mind, it was just a matter of coming up with a melody we all agreed upon, then telling the story with our lyrics afterward.

What is the most challenging thing about being an artist?

For me, one of the most challenging things about being an artist today has to be all the different hats an artist is forced to wear. The artist isn’t just the artist anymore. It seems the artist has to be his or her own manager, stylist, content curator, promotion and marketing team, hype man, etc... Plus the importance of a substantial social media presence and following is mind blowing to me. I struggle with the fact that some artists are so established with thousands of followers or subscribers and they can end up getting major opportunities even though their talent and live performance skills are lacking. That, plus the fact that we as artists must perform no matter what we’re going through or feeling inside is always tough, but these things come with the territory. It’s the life we chose. So I’m just creating more content in hopes that my followers and subscribers will eventually get to the point where those same opportunities will come my way as well.

What is the most fulfilling thing about being an artist?

That’s easy! Doing what we love for a living! Period point-blank. Money, success, fame, and accolades are great, but I truly love singing, writing songs, playing piano, and performing. I feel extra blessed because I’m lucky enough to be making music with my friends! It feels so good, there’s never a boring moment with our lifestyle, and I truly feel like it keeps the wrinkles away from my face. I love the look on the face of strangers when I’m performing with my friends somewhere, and I can see the sheer look of joy, happiness, satisfaction, and approval on their faces. That combined with loving what I’m doing, multiplied by how many friends I have in the band making music with me, is just like icing on the cake!

What advice do you have to share with other songwriters?

Surround yourself with musicians, singers, and songwriters who are better than you, be easy and pleasant to work with, trust your instincts, and don’t create for money and fame. Quincy Jones was right; God leaves the room when that kind of talk is taking place in the middle of the creative process! Just make music that moves you and feels good to you. That is when God is with you, and that is when the magic happens.