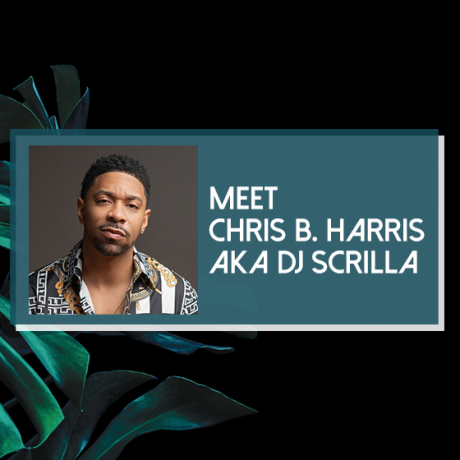 A Conversation with APM Featured Artist Chris B. Harris

For TV/film songwriter, Chris B. Harris landing his dream job has been fifteen years in the making. Before landing over hundreds of music placements on shows across major networks like ESPN, HBO, NBA, NFL, Showtime, and Starz, Harris was a recording artist - writing and recording original music under the alias DJ $crilla - and when Harris found himself working alongside an album artwork designer who asked him if he'd be interested in licensing his music for the big screen, the story writes itself.

Today, his music - from the start of his TV/film career to now - continues to receive major placements in onscreen stories on Netflix, Hulu, BET, MTV, and more. Harris's most recent track, "Social Distance" earned the artist a win for the 2020 Mark Award Best Non-Categorical / Wildcard Track. His sound speaks to an eclectic audience, one that should be ready for anything. From tracks like "Yea Mama I Made It" to "I Do" to "Clumsy Love" both Harris's vocals, songwriter, and hypnotizing artist energy can be easily heard throughout the music he writes.

To celebrate the recordings of some of his first live performances since lockdown, Chris B. Harris opened up to APM about what shows inspired him to write for the screen, his intriguing visual songwriting process, and advice he has for aspiring screen songwriters.

Can you remember when you first fell in love with music and decided to pursue it as your career?

I’ve loved music since I was a kid. I am grateful I was exposed to dance classes such as rap and ballet growing up because that expanded my knowledge about the different styles of music. When I was in my late teens, I had decided I wanted to be a DJ. My mom bought me my first DJ set and I couldn’t have been happier.

After having some friends over, I threw on a record and as the instrumental played, my friends and I began to freestyle. It was at that moment I realized that I don’t want to play the music, I want to make the music. I then traded my turntables for a drum machine and booked my first recording session at a local studio in Cleveland, OH, and it’s been on ever since!

Do you remember the first time hearing a song or a music piece in film or TV inspired you to do what you do?

I can remember watching Boyz ‘N’ The Hood as a kid. There is a song called “Black on Black Crime” by Stanley Clarke that plays in the film and when it does, you can’t help but to feel it. I wouldn’t start making music until several years later, but I often think about this song and how it made me feel.

What led you to choose to make music for the screen rather than being a recording artist?

Initially, I wanted to be a recording artist because I thought that was the only option available to me. I tried for years to be the guy that was on MTV and BET. Then I was unexpectedly introduced to the world of writing for the screen. I hired a graphic designer to create my album artwork, and he just so happened to also write music for the screen. He asked if I’d be interested in writing for the screen, and the rest was history.

Who are some artists that influence your hip-hop sound?

My sound has been influenced by so many artists. 2pac comes to mind immediately because I thought he was a great storyteller. When he spoke, he made you believe in what he was saying.

Another artist that influences my hip-hop sound actually isn’t a hip-hop artist. Believe it or not, it’s Marvin Gaye. Specifically, it’s his song “Trouble Man”. Listen to the track around the 2:12 mark. He’s flowing! It’s the same rhythmic flow we’ve heard from other artists such as Bone Thugs-n-Harmony, Eminem, and The Migos.

What’s been the most challenging thing about being an artist?

The most challenging thing about being an artist is being vulnerable. Your art is open to interpretation and criticism. What sounds great to me may or may not sound that way to you. My art is my baby, and it can feel challenging when I’m basically saying, “Hey world, here is my baby! What do you think?”

What is the most fulfilling?

The most fulfilling thing about being an artist is creating a piece of art and appreciating the process to get there. A few years ago there was a time in my life where I had hit a rough patch. I remember not having a place of my own, basically living in a room, no bed, depressed and confused about how I had even reached that point. I vividly remember watching TV one Sunday and I started binge-watching a show and I thought to myself “I’m going to have a song on this show one day”.

Fast forward two years, and I had my own place, wasn’t depressed, and even bought a new bed. And guess what? My song aired in an episode of that show I had watched two years prior. It’s fulfilling because I know the journey traveled to get to have that song placed. I realized that while I was going through that rough time, it may not have felt good in the moment, but it was helping me shape my future.

When you’re tasked with writing a song for the screen, do you envision a scene first or is it easier to work off the melodies or sounds you might already have in your head? What is that process like for you?

When I’m tasked with writing a song for the screen, I try to visualize where I want the song. For me, I try my best to manifest the different places I can see the song thriving. Believe it or not I write most of my songs in the shower, gym, or the car. If I’m in the car and I get an idea, I’ll pull over or into a parking lot and spend a few minutes hashing out that idea. A great example of this would be APM/RYL’s song “Gee Double Oh Dee”. 95% of this record was written in the car on the side of the road.

What was it like to record these live performances?

Recording these live performances has been some of the best therapy for me. This pandemic has been an adjustment for us all. However, creating gives me such a positive outlet, and when I’m able to actually perform, it takes that positive outlet to a new level!

Can you remember the most memorable experience (maybe the first time) you heard your music used in a scene on screen?

So many placements hold special memories, but nothing compares to the first time I heard my music on TV. I was watching HBO on-demand and decided to start a new show. All of a sudden, HBO shows a promo for the upcoming season of Ballers — with Dwayne “The Rock” Johnson, and that’s when I heard my voice… on the television. I went through several emotions from confusion, to shock, to excitement. I literally jumped on the couch and had a “Tom Cruise” moment. The dogs were barking, I was barking, and it was truly an awesome morning, but maybe not for my neighbors.

What advice would you give to aspiring musicians and performers who want to be involved in film and TV?

I think the best advice I could give to an aspiring musician looking to get involved in film and TV is to stay the course. This was the advice given to me when I first got started, and I’ve never forgotten it. You’re going to have moments where it seems like you aren’t getting traction but stay the course. Everyone’s timeline is going to be different, so just continue to focus on your craft and your time will come.

Subscribe to our newsletter to receive weekly Music Director Picks in your inbox!