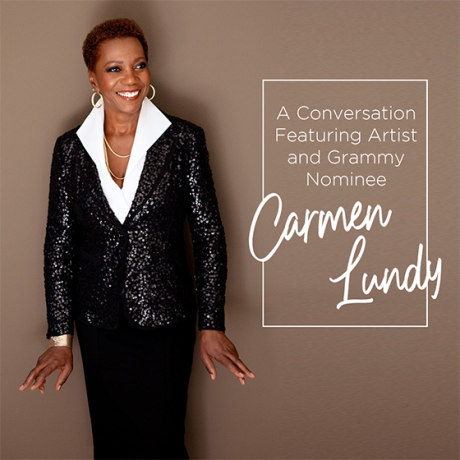 Jazz vocalist, composer, arranger, and Grammy-nominated artist Carmen Lundy has always been a driving force for bringing the Jazz genre into the contemporary music world. Her 2019 album Modern Ancestors is nominated for a Grammy for Best Jazz Vocal Album at this year's Grammy Awards.

Ms. Lundy spoke with APM to discuss the inspiration behind Modern Ancestors, her love of Jazz music, and how she views composing music for APM and Sonoton as a new kind of artform.

Can you tell us about the title of your album, Modern Ancestors, and how the name relates to the jazz sound on the record?

Most people think of Jazz as something of another time. It's from back when your grandparents were dating, so they don't really think of Jazz as something that happens every day alongside all the other mainstream art forms. So the word "modern" kept coming up for me. This is the time I live in. I'm a Jazz singer, but I'm not really doing Billie Holiday music anymore, so the word "modern" was me making a statement about our music and the life we are living now. The "ancestors'' part has to do with the Billie Holiday's and all the people that have influenced me in some way, the people that have paved the way for artists to step into that path and continue it. I wanted for the listener and for myself to really see the balance of predecessors and how we get all of the influences - the sounds, the words, the songs, the personalities, the characters - and how they have contributed to shaping my 40+ year career.

Why is the jazz genre so important to you?

I think jazz was a natural symbiotic way of expressing all the different sounds that I have grown up with and heard my whole life. Growing up in a family where music was apparent before I could even walk before I could even form sentences. We were a family who went to church a lot. I loved that sound and the community, being a part of one song. I began to play [gospel] songs on the piano and my mom recognized it. That's when my mom made sure I could get piano lessons. There's something cool about sitting down at an instrument and being like, "I did that." I was so young and I think most parents recognize those things that children enjoy and they place their children in that environment so they can thrive and that's what happened to me.

Getting into music programs in school, I always just loved it and had fun with it, and that's when I was introduced to the classical literature and all the wonderful music of the seventeenth, eighteenth, and early nineteenth century but at the same time, by the time I was a teenager, The Beatles were all the rage – but so was James Brown, Aretha Franklin, Dionne Warrick, Barbra Streisand, and Marvin Gaye! All of that was part of my musical world.

While in school, I was also getting bored with my piano playing style, but when I was introduced to a young pianist that came through our high school, his accompaniment style was so special. It sounded different. It was cool, and it was all these things I didn't know how to do. So I asked him what he was doing and he said, "Oh, I'm studying Jazz and piano." We became fast friends and he introduced me to a lot of the jazz artists at that time. At that time, I was listening to people like Roberta Flack and I was performing songs that were not really R&B but they were cool!

When I was entering my first year of music school, the school didn't really have any choices for singers except to go into opera or go into education but I really wanted to be a performance major, and it just so happened that the same pianist and friend I had met in high school, was at the University of Miami's Jazz Department! I was studying all this classical stuff but on the side, I was singing original songs by all my classmates that were jazz musicians so I was sort of dabbling in both worlds. The University of Miami's Classical Voice and Jazz Departments eventually agreed to allow me to enter the jazz program as a singer. They didn't really have a program designed for singers in jazz so I was the one to institute that, and that's kind of what happened.

Do you think there's a love for jazz music among young music fans today?

Absolutely. 100%. A lot of young people who are pursuing the profession are entering music programs around the world, and there are more jazz departments in music schools now than there ever have been. So now, young artists are able to enter jazz programs immediately. I know classical pianists who discover jazz, have an epiphany and now their whole life is about jazz. I spent 17 years representing Betty Carter's Jazz Ahead. They started a program at the Brooklyn Academy of Music in the mid-nineties where she would meet young gifted players and wanted to give them a chance to develop their craft. The Kennedy Center invited her to bring that program and we spent two weeks every spring break working with kids from all over the world.

In the seventeenth year that I did jazz ahead, I met a sixteen-year-old pianist from that program, and now, he's on Modern Ancestors. So my entire time there, I watched a little sixteen-year-old violinist become all the rage at 32 and 35 years old. So I can see that these kids come in and they're already skilled players. I've watched and observed and learned a lot myself about the younger generation.

It sounds like working with younger generations was something that really inspired you.

Yes, I started my career in Miami when I was eighteen, but then when I got to New York and made ends meet, I had voice students and would teach privately. Then I got a job teaching at a children's theater in New York. I really wanted to be a performer and it turns out, I was able to do both. It seemed like a natural fit for me to work with younger, developing artists because I identified with that. I know what it's like to have insecurities about what your potential really is or if you really have the qualities that can make you a career in music. There were a lot of things that I learned from being on the side of the mentor and on the side of the student.

You’ve said before that, “Acting helps me to get more comfortable and acquainted with the art of performance.” Has your time in the theatre had any effects on your creativity or artistry when you go back to being a musician?

My first opportunity to do any kind of theater was in a play about Billie Holiday by a man named Laurence Holder called They Were All Gardenias, and the role that I played had to do with Billie Holiday's return to the recording studio after World War II had ended. I ended up taking acting courses for almost two years, and all of that was really to come to the stage as a singer with a little more comfortability. With the acting part, I didn't have to worry about my notes or my pitch. It was more just the words and the script. I never set out to do theater but as a result of that, my agent would send me on auditions for things and I was reluctant for that because I was in pursuit of recording contracts, but I did get a very important opportunity to do a Broadway show. It was called Sophisticated Ladies, about Duke Ellington's music and Duke Ellington's music for jazz artist is the penultimate. I then found myself on tour in Europe for six months doing a Broadway show, and I learned a lot about how the audience receives the story. It was a wonderful experience to not only be in that great show but to travel the world and I think I still have some of those theatrical mannerisms in my singing.

Do you feel like a different person when you're playing, singing, or writing jazz versus when you're composing music for a film or something on screen?

I discovered that I really love being on the other side of the control room. I like producing. I really love that part of scoring something and then having somebody else play it and bring it to life. I enjoy that, and that's what working with APM and Sonoton has done. It's allowed me to be the composer without necessarily being the performer of it. So I can be commissioned to write lullabies and then hire some other people to sing it. There's something really great to be able to conceive of something that doesn't necessarily have to have my direct contribution vocally. but my contribution is in the production, the composition, and the arranging.

What has been the most fulfilling thing for you working in the music industry?

I love sharing the stage with music. I don't want to be on stage by myself. I like the whole collective ensemble experience. I also love the role musicians play in bringing music to people and transforming a moment in time, giving people a sense of their own purpose through the sound of music, reassuring people. Music has a way of reassuring you about your life, your choices, what's ahead, how to make life better for yourself. I like that magical, unexplained feeling that happens when music plays and when people are engaged. I think my gift is really in the storytelling, in the communicating of the thought or a feeling through a song or music. I think somewhere in there is my fulfillment in being able to take some kind of intangible sound and making something tangible. I love seeing how my life and other people's lives can be lifted up because of one musical experience.

On your Twitter page, your bio says, “Music for spirit, heart & mind.” What does that phrase mean to you?

Music just happened to be one of the most amazing things about life. We have somehow developed a sense of ourselves as humans and that we can communicate through sound and through instruments. We can create feelings that only come from the human experience. The human experience is so profoundly complex that music has a way of feeding that. It affirms life. It makes the present day a liveable thing. It's almost as simple as when you're in your car sitting in rush hour traffic and you put the radio on, just because there is something that's going to come through, fill that space, and allow you to have a different focus about that moment in time. So, it is for the spirit, and not in a religious sense, but just in the sense of the thing that gives us our breath and a universal reason to live. It is reinforced by the arts. Music is always present no matter if we're saying goodbye to someone or someone's being born or getting married. Music is always there. I don't think we as humans realize how much we depend on it and how much it allows us to thrive.